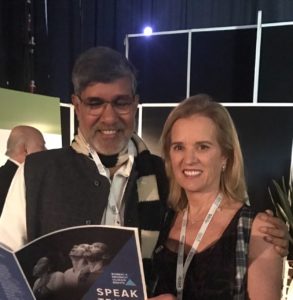 She is the author of Speak Truth to Power (Crown Books/Random House 2008). Speak Truth has grown to include a photography exhibit now travelling on four continents, a play by Broadway playwright Ariel Dorfman which has opened in over 20 countries, an award winning website, a PBS documentary film, and a twelve week education and toolkit for action packet now being taught to millions worldwide.

Ms. Kennedy serves on the boards of the U.S. Institute of Peace, Human Rights First, Ethics in Action, Sustainable Development Goals Center/Africa and the Kailash Setyarthi Children’s Foundation as well as several public companies. She is the best-selling author of Being Catholic Now (Random House 2000). A graduate of Brown University and Boston College Law School, she received the Social Activism Award from the World Summit of Nobel Peace Laureates along with many other awards and honorary degrees.

Ms. Kerry Kennedy is the mother of three daughters, Cara, Mariah and Michaela.