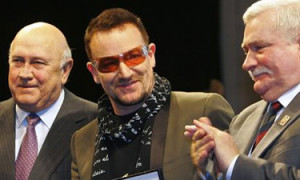 Bono, lead singer of U2, received the Peace Summit Award 2008, in Paris on 12 December, during the 9th World Summit of Nobel Peace Laureates. Bono was chosen by the Nobel Peace Laureates for his long-lasting engagement in the campaign for debt cancellation in third world Countries and for his efforts to raise public awareness of the Millennium Development Goals.