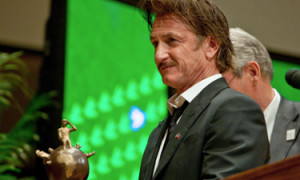 Oscar-winning actor Sean Penn gave an emotional speech Wednesday urging the world community to help Haiti as he accepted an award from a gathering of Nobel Peace Prize laureates for his humanitarian work in the earthquake-ravaged country.

“It’s an overused phrase I know, but I trust you know its genuine today, I am humbled. I’m trembling and I like it,” Penn said after accepting the 2012 Peace Summit Award from former Soviet President Mikhail Gorbachev, who was joined on stage by the Dalai Lama and former Polish President Lech Walesa.

Penn has become a major player in efforts to rebuild Haiti after the January 2010 earthquake that devastated the island nation, flattening thousands of buildings, killing more than 300,000 people and leaving at least 1.5 million homeless.

He used his speech at the 12th World Summit of Nobel Peace Laureates to urge the world community to remember Haiti and invest in the country’s future and President Michel Martelly, who took office in May 2011. “We have a very short window to support this team of the Haitian people’s choosing,” Penn said. Papers in Penn’s hands shook and he became emotional at times during his speech as he described conditions in Haitian refugee camps or told the story of a Haitian police officer who lost his family in the earthquake. Penn also warned that if Haiti fails it could become a harbor for narcotics trafficking and terrorism near the United States.

Penn is the first non-Haitian to be designated an ambassador-at-large for Martelly. The actor is CEO of the J/P Haitian Relief Organization, a rapidly growing and increasingly prominent aid group. The organization manages two camps that are home to about 18,000 people. Penn spends at least half his time in Haiti. “He actually exchanged his home in Malibu for a tent,” Udo Janz, United Nations high Commissioner for Refugees, said when he introduced Penn to accept the award. “Think of it as the Oscar for your humanitarian commitment Sean.”

← Charter For A World Without Violence Award 2012 to Roberto Baggio →