CELEBRATING A LIFE DEDICATED TO PEACE

“It is our collective responsibility to ensure that the 21st century does not repeat the pain and bloodshed of the past. Because human nature is basically compassionate, I believe it is possible that decades from now we will see an era of peace – but we must work together as global citizens of a shared planet.”

– His Holiness, the Dalai Lama 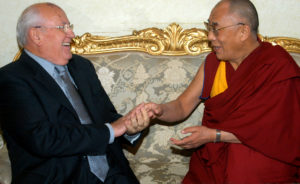 On 6 July 2020, His Holiness the Dalai Lama turns 85. The Permanent Secretariat of the World Summit of Nobel Peace Laureates joins with the rest of the world in celebrating an exceptional life, dedicated to the pursuit of peace.

It been our privilege to host His Holiness the Dalai Lama at six of the World Summits of Nobel Peace Laureates, of which he has been a longtime supporter and contributor. In his words, “President Mikhail Gorbachev and Mayor Walter Veltroni had the foresight to initiate the World Summit of Nobel Peace Laureates that has provided us with the forum to apply our collective minds to some issues that affect the world.”

His Holiness further went on to say, “What we [the Nobel Peace Laureates] all share in common is an active wish to encourage and support simple warm-heartedness, peace and human wellbeing in the world in which we all live.”

As a lifelong proponent of dialogue in the pursuit of peace, it was an honor to welcome His Holiness to the World Summit of Nobel Peace Laureates. From his first appearance in 2003, and until his most recent Summit in 2014, His Holiness the Dalai Lama generously shared from his vast ‘Ocean of Wisdom’ on many pressing issues, including ethics, the youth, nuclear weapons, human rights and freedoms, and more – always with the golden thread of compassion to guide him.

Taking inspiration from His Holiness the Dalai Lama, and his fellow Nobel Peace Laureates, the Permanent Secretariat of the World Summit of Nobel Peace Laureates will continue to steadfastly pursue our goals. These include establishing the proper environment to promote the engagement of Nobel Peace Laureates – the Summit – in order to share their knowledge and experience, engaging the minds of ordinary people in general, and young people in particular, on real matters that pertain to global affairs, with a focus on attaining global peace on the planet.

In the words of His Holiness, the Dalai Lama, “We must cultivate dialogue, not the use of force…this century must be a century of dialogue, through education from kindergarten until university… The only way is dialogue. Any solution through dialogue is genuine. When you use force, the solution is unpredictable. It may create more problems…”

As he celebrates this momentous birthday, we wish His Holiness continued good health, happiness and much joy. We look forward to many more years of enlightenment, as he continues to share teachings on topics close to his heart, such as nonviolence and compassion.