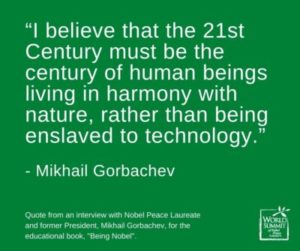 Former President Gorbachev has lived a life of significance, and was awarded the Nobel Peace Prize in 1990, in recognition of “his leading role in the peace process which today characterises important parts of the international community”.

As a private citizen, Gorbachev continued to make a significant impact on the world stage.

In addition to establishing the Gorbachev Foundation in 1992, as well as the environmental NGO, Green Cross International, in 1993, he masterminded the establishment of the World Summit of Nobel Peace Laureates in 1999. What began as a discussion between seven Nobel Peace Laureates in Rome, has grown to one of the most important annual events in the field of peacemaking, attracting Nobel Peace Laureates, high-profile leaders, organizations, students and academics from around the globe. A Permanent Secretariat was established in 2006, and to date, 17 Summits have been hosted in multiple countries, across four continents.

As the Permanent Secretariat, we would like to recognize and celebrate the immense contributions that former President Mikhail Gorbachev has made to his fellow man, and to humanity, during his lifelong pursuit of peace and justice, and as a campaigner for the environment.

We wish you good health, and much joy and happiness.