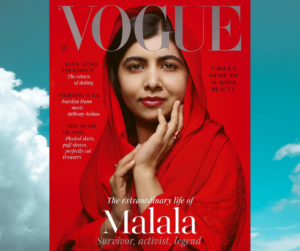 Congratulations Malala! The youngest Nobel Peace Prize Laureate brings her struggle for the right to education and against Islamophobia to the cover of July’s issue of British Vogue Magazine.

It is an opportunity to reaffirm female empowerment – Malala has become an icon for all woman who have fought for their rights – and launch a strong message to those who tried to stop her when she was only 15 years old.

Malala is about to turn 22 years old and she is already a symbol against the suppression of women, children and young people, and of the right to education for all children around the world

Malala Yousafzai is the youngest person to receive the Nobel Peace Prize. She was born in Pakistan and following an assassination attempt when she was 15 years old, she moved to the United Kingdom.

In December 2019, Teen Vogue published an article called, “Malala Yousafzai on Education, Islamophobia, and the New Wave of Youth Activism”.

← Leymah R. Gbowee “I believe more in evolutions than in revolutions” →