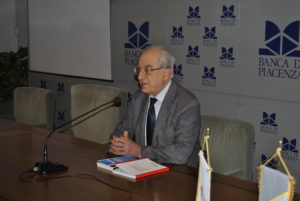 Lawyer Cassationist, journalist, publicist and author of numerous legal codes and texts, passionate in history and art, Dr.Corrado Sforza Fogliani has been chairing the Committee of Piacenza for the History of Risorgimento for 40 years.
From 1986 to 2012 he has been President, and also currently he is President of Honor and President of the Executive Committee of the Banca di Piacenza, bank instituted in Italy in first place for patrimonial solidity, and is an example for the attention to territories, families, small and medium enterprises, and the recovery and preservation of the artistic heritage.
For twenty-five years he has been President of Confedilizia, currently he is President of its Study Center.
In 2012 for his professional acknowledgments the President of the Italian Republic named him Cavaliere del Lavoro.
Since 2015 he has been President of the National Association pf Popular Banks, an association uniting 70 credit institutions, currently representing 28% of the Italian banking system, with over 9 thousand branches, one million members, 8 thousand employees and over 12 million customers .