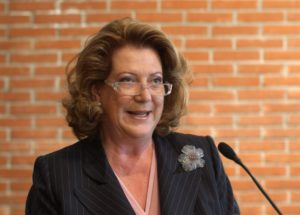 She graduated in Chemistry at the University of Pavia and was awarded an honorary degree in Pharmacy and Medicine. She is Chairman and Chief Executive Officer of Bracco Group, a pharmaceutical chemical colossus founded in 1927, and of Italian Diagnostic Center, a comprehensive service center oriented towards prevention, representing an excellence in all Europe.
Under her guidance, Bracco Group acquired worldwide a leading role in imaging diagnostic sector. Today the company has a consolidated turnover of about € 1.3 billion, the 87% is on foreign markets, employing approximately 3450 people. Each year it invests approximately 10% of its turnover in R & D – it is proud of its wealth of over 1800 patents.
She is President and Managing Director and President of Bracco Foundation, which promotes the enhancement of artistic, historical and cultural heritage, promotes education and professional training of the youth and the culture of values ​​and responsible commitment, expressing a strong international connotation.
She has been nominated Cavaliere del Lavoro by the President of the Republic of Italy and awarded the honor of Cavaliere di Gran Croce of the Order of Merit of the Italian Republic and of the Gold Medal of the City of Milan.
Following the family traditions, Diana Bracco took numerous institutional and associative positions. She has been the first woman to be elected President of Federchimica and Assolombarda.

Previous positions:  President of Expo 2015 SpA, General Commissioner of Section for the Italian Pavilion at Expo Milano 2015, Vice President of Research and Innovation in Confindustria, President of Sodalitas Foundation and Member of the Council of Trustees of the National Gallery of Art in Washington