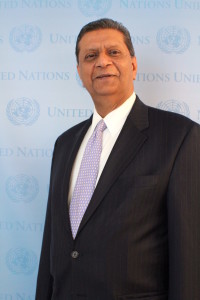 Senior Advisor and Representative to the UN

Mr. Amir Dossal serves as a Representative to the United Nations for the Permanent Secretariat of the World Summit of Nobel Peace Laureates. Mr. Dossal is the Founder and President of the Global Partnerships Forum, a non-profit knowledge platform which provides change-makers with tools to build innovative partnerships to address economic and social challenges. He served at the United Nations for 25 years, and was the founding Executive Director of the UN Office for Partnerships until September 2010. While there, he helped to manage the $1 billion charitable gift by media mogul Ted Turner. Mr. Dossal is an accomplished diplomat, with a deep understanding of global diplomacy, as well as extensive experience in managing technical assistance projects in emerging markets. He works globally across sectors, including education, environment, finance, health, media, technology, as well as peace, security, and human rights. In 2010, Mr. Dossal received the Humanitarian Award from the UN Association of New York for his accomplishments in Partnerships to End Poverty and World Hunger. In that same year, he was appointed by Prince Albert II of Monaco as Ambassador for Peace and Sport. In 2015, Mr. Dossal and his son received the Humanitarian Innovation Award for intergenerational partnerships. In 2016, the Institute of Chartered Accountants in England and Wales bestowed him with their Outstanding Achievement Award for his work in uniting public and private organizations to address the world’s economic and social challenges. He is a UK Chartered Accountant (FCA) and has lived and worked in five continents.

Favorite quote: “The task of the mediator is to help the parties to open difficult issues and nudge them forward in the peace process. The mediator’s role combines those of a ship’s pilot, consulting medical doctor, midwife and teacher.” – Martti Ahtisaari