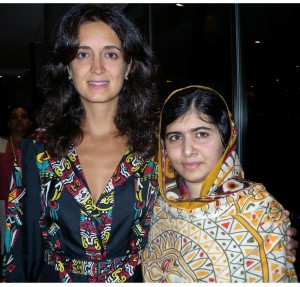 Ms. Livia Malcangio has served the Permanent Secretariat as the Director of Institutional Relations and Protocol for more than ten years, and has worked for the World Summit of Nobel Peace Laureates since it was established in 1999. She maintains a master’s degree in International Relations and Protection of Human Rights from the Italian Society for the International Organization – United Nations’ Association (SIOI). Ms. Malcangio is a registered journalist, a senior professional interpreter and translator, and a fervent human rights activist, who believes in the power of international interactive platforms to educate and inspire young people, such as the stage provided by the World Summit of Nobel Peace Laureates. To strengthen her belief, she has written an educational illustrative book, Being Nobel – Nobel Peace Laureates and their Courageous Pursuit of Peace, distributed each year at the World Summit and to schools during the year. Being Nobel is a tribute to the many inspiring Nobel Peace Prize Winners and to their untiring work to bring peace and social justice to the world.

As the KidsRights Foundation’s executive director in Italy for seven years, she has lobbied tirelessly for children’s rights. She has worked at the UN Food and Agriculture Organization (FAO) as the personal assistant to the Under Secretary-General for Economic Affairs for three years. As a professional interpreter, she has translated for a number of world leaders during G8 Summits, the World Social Forum, and humanitarian missions. Ms. Malcangio has also worked for the Italian Government, managing European funds for international training programs and editing books on sustainable tourism and inter-religious dialogue. Ms. Malcangio lives in Rome and speaks five languages, including French, English, German, Spanish, and Italian.

Favorite quote: “One book, one teacher, one student, one pen can change the world”. – Malala Yousafzai