On Wednesday, 1 November 2017, Nobel Peace Laureate Lech Walesa will have a Conversation titled “Peace and Justice: the humanity global path towards sustainable development” within the 39th session of the UNESCO General Conference in Paris. 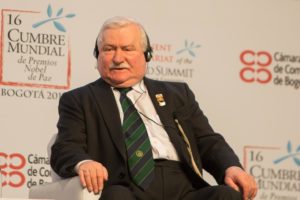 As part of the leaders’ Forum of the 39th session of the General Conference of UNESCO, the event is being organized with the cooperation of the Permanent Secretariat of the World Summit of Nobel Peace Laureates and supported by the Albert Schweitzer Institute. This Conversation is an attempt to bring different voices to the Leaders’ debate on how UNESCO could best support its Member States in their bid to implement the 2030 Agenda for Sustainable Development.

Nobel Peace Laureate, Lech Walesa, former President of the Republic of Poland was awarded with a Nobel Peace in 1983 for his engagement for human rights and in particular for claiming for social justice of his fellow workers in Gdansk Shipyard. He raised his voice by using dialogue and non-violence as a means to achieving peace and justice. More than 30 years later, the international community claimed for peaceful, just and inclusive societies as an imperative for development, thus adopting the 2030 Agenda for Sustainable Development and its 17 Goals.

The Sustainable Development Goals (SDGs) have set ambitious global targets to end poverty, protect the planet, and ensure that all people enjoy peace and prosperity. Countries all over the world are facing many challenges to putting this Agenda forward and achieving its Sustainable Development Goals (SDGs) by 2030. Persisting poverty, conflicts, growing inequality, high unemployment rates, gender discrimination, and prejudices against minorities are some of the problems, which will need to be tackled, at several levels for countries and the international community as a whole to move forward.

The adoption of the 2030 Agenda for Sustainable Development during the 70th session of the United Nations General Assembly in September 2015, together with Paris Climate Agreement of December 2015 have opened a new page in the history of international cooperation. Taken as a plan of action for people, planet and prosperity, this collective path seeks to strengthen universal peace in broader freedom, to ensure that no one is left behind.

In this context, the Conversation with an eminent Nobel Peace Laureate, Lech Walesa, former President of the Republic of Poland, will focus on 2030 Global Agenda, which calls for a collaborative action of all stakeholders in every society. President Walesa will give a reply to Liv Torres, Executive Director of the Nobel Peace Center of Norway. The hope is that this dialogue might bring different and innovative insights into the discussions on UNESCO’s role in the implementation of the 17 SDGs.