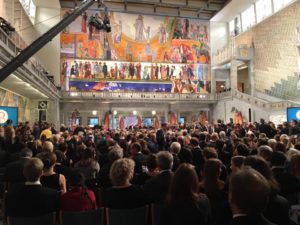 The next Summit will be devoted to roads to peace, democracy, peace building and reconciliation. And we believe the attendees will share their inspiring stories and experience to contribute to the path of sustainable peace and democracy in Colombia. On that occasion, we felt absolutely pleased and honored to meet well-known leaders from Colombia – jurists, professors, businessmen, who contributed to the drafting and signing of the Peace Accord, working patiently for more than four years. 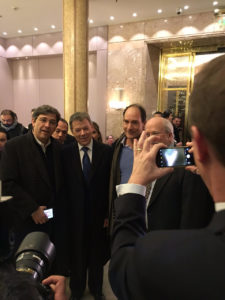 We are also particularly glad to have met closely some of the victims of armed conflict. If someone as Leyner Palacios, Pastora Mira Garcia, Fabio Laperdomo, Iliana Pachene, Ingrid Betancourt, Clara Rojas, and Ector Abad who are here today in President Santos delegation, were able to forgive the atrocities inflicted to their families, then I think we shall all follow suit.” 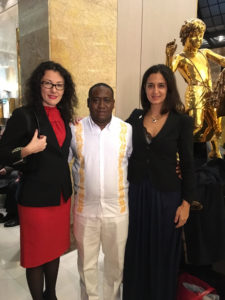 On Saturday, the Nobel Peace Prize Ceremony in Oslo City Hall commenced in presence of the royal couple, crown prince couple and members of Norway’s government coalition and parliament together with other notable guests. The prestigious gold medal and a handwritten diploma were given to the laureate by committee deputy chairman Berit Reiss-Andersen.

Accepting the Prize for his efforts in the peace process, Mr Santos paid tribute to the families of victims of the conflict. He said the “great paradox” of peacemaking was that “the victims are the ones who are most willing to forgive, to reconcile and to face the future with a heart free of hate”. In a deviation from his prepared remarks, the President asked the representatives of the victims present to stand and be recognised for their own efforts in the peace process, to much applause.

On Sunday, the representatives of the Permanent Secretariat visited the traditional Nobel Exhibition at the Nobel Peace Center with Liv Tørres, the Executive Director. “Hope over Fear” is the title of the photo exhibit dedicated to at Nobel Peace Laureate Santos, who opened the exhibit. 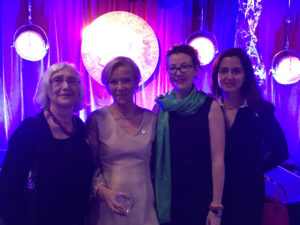 Later that day President Santos also mentioned the 16th World Summit of Nobel Peace Laureates, relating to the fact that the co-organizer of the Summit has deep historical roots to Sweden, the origin of the Nobel Prize.

“Swedish citizens pioneered mining in the mountains of Antioquia, in my country, at the beginning of the nineteenth century. One of those pioneers was Carlos Segismundo De Greiff, who originated a family that has given splendor to Colombia in science, arts, literature and law. This De Greiff family tree – to give just two examples – gave us one of our greatest poets, León De Greiff, and the former Minister of Justice and current director of the Chamber of Commerce of Bogotá, Mónica De Greiff, who is organizing the Summit of Nobel Peace Laureates to be held next year in February in Bogotá” – said Colombian President, Juan Manuel Santos in his speech for the Parlament.

The bright and busy weekend ended with the evening show and concert was hosted by American talk show host Conan O’Brien. Among the artists performing were Grammy winner JUANES, founder of Peace Without Border, STING, founder of Rainforest Fund, working in more than 20 countries to protect both the world’s rainforests and the indigenous people living there.

Colombian star Juanes spoke about the Peace Accord in Colombia before his performance: “For many of us, this is like a dream come true. The future is difficult, but this is an opportunity for us, as Colombians, to build the peace we deserve, so thank you president Santos.”