On the Road: Reflections from Laureate Jody Williams

Reflections from Nobel peace laureate Jody Williams on Day 2 of the Opening Borders: #WomenRefugeesWelcome Delegation to The Balkans and Germany.

DAY 2: FOLLOWING THE ROUTE OF REFUGEES THROUGH THE BALKANS

Before beginning this part and lest you think I’ve taken some illicit substance that has turned me into a raging Pollyanna – in other words a blind and “unrealistic” utopian peacenik – let me make very clear couple of things.

It is logical that not every person in this flood of humanity is pure of heart and just seeking refuge from war. One of the attackers in Paris entered through Greece. But the people we have talked with who are dealing with the refugee flow through their countries are insistant that 99.9% of these people are indeed normal human beings fleeing war. They insist that linkages between the attacks in Paris and these people who have the right to refuge must not be mixed together.

Both the massive flow of refugees and ISIS are the fruit of the wars in the Middle East. The beginnings of tackling the results of the wars can only be built on the foundations of ending the war in Syria.

We drive about an hour from Belgrade, Serbia, to visit Adacevi (a-da-shev-si) transit center, a few miles from the Croatian border, where refugees wait to be bussed across the border to the Sid (sheed) train station. There they will get on the trains and head to Slavonski Brod refugee transit center in Croatia to wait for the next train that will take them from there, across yet another border into Slovenia.

By the time these people reach Adacevi, these thousands upon thousands of people fleeing years of war have already managed to escape Syria, get through Turkey, Greece and Macedonia to reach Serbia – and from there, they still have to transit Serbia, Croatia, Slovenia, Austria – then most wanting to end up in Germany, Sweden and some the UK. 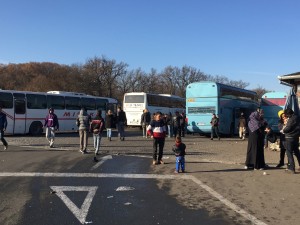 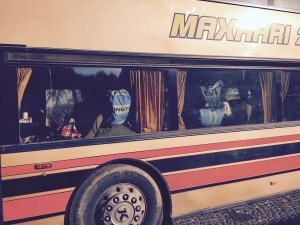 Look in the windows of this bus. What you see are the belongings of the people who managed to escape the war. Try to imagine yourself, fleeing years of attacks, threats, bombings, your homes and communities destroyed and family members killed or wounded.

So, at some point you decide you cannot take it anymore and you leave your country with the few things you can carry in the bags you see piled against the windows of this bus. And these people are “lucky.” They managed to get to Serbia with some possessions. Many have been robbed of all they have.

We hear from a Syrian doctor who’d talked with with an engineer still in Syria and who managed to get water flowing again to one million people in Homs. It seems that 80% of the people in Syria live without running water now and 85% without electricity.

The man was twitchy, nervous. After a few days working together, he talked a bit and it turns out his anxiety has its roots in a story none of us should ever have to live: Two of his brothers were killed by the Assad side and another in aerial bombardments – whose planes and whose bombs? Who knows. Nine of his cousins were forcibly recruited by ISIS – rather than fight, they all committed suicide. Also, the doctor who told us this story had already lost 30 members of the extended family to this war.

If these were your stories, how much longer would you endure the war ripping your families and communities to shreds and continuing the turning your country into piles of rubble? At what point would you come to the decision that no matter the risks, it was time to leave your country and try to find refuge somewhere.

We reach Acadevi and get out of our own little buses and walk to the welcome center to hear what happens when the refugees arrive there. 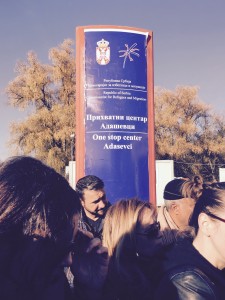 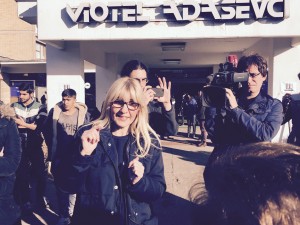 Just as the woman above begins telling us the transit process for the refugees who arrive here, we hear a woman’s voice, full of fear, screaming, “Elena. Elena. Elena.” She is running along the length of the dozens of busses, screaming for her lost child, Elena. They are a fortunate family. Apparently the mother had fainted and Elena had wandered away. Staff at the transit center had found her and brought her inside the facility. Someone brings the mother to be reunited with her child. Here they are, the mother, father and Elena: 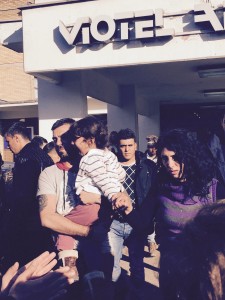 Suddenly Shirin Ebadi is approached by a small group of men. They are Iranian Kurds who heard Shirin was there and sought her out. One was a doctor – a general practicioner – another an electrical engineer. They said there was nothing for them in Iran so they’d decided to try for a different future. They also said they wanted to be helped by Kurds that already have left Iran. They hope to find refuge in the UK.

They tell their stories to Shirin. Their treatment through Turkey and Greece echos other stories we’ve heard. They were in a smuggler’s van, being chased through Turkey by police until they escape across the sea into Greece.

Smugglers charge about $1,200 per person to take refugees across the water from Turkey to Greece. Shirin asked them why they didn’t pool their money and buy their own boats. They explained that smugglers take knives and puncture the boats of people who try to do that. Some boats carrying refugees have been shot at.

The smugglers are sending a very clear clear message to refugees: our boats or no boats. And by the way, once the smugglers cram as many bodies as they possibly can onto a boat, they walk away and leave it up to the refugees to get to Greece – if they can.

The Iranians talking to Shirin said they’d only made it because the engineer on the boat knew how to operate it and they had GPS so they could find the proper route.

By the time they reached the transit center, they had absolutely nothing left for smugglers and war profiteers to steal.

As Shirin led them in a song for freedom and democracy in Iran, tears filled her eyes.

It may not quite look like it, but here they are singing: 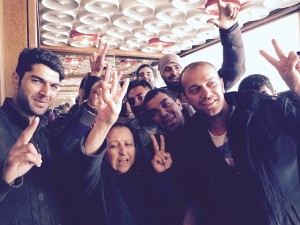 Here are a few pictures of some of the refugees at the transit center waiting to reboard buses and get to the train station. 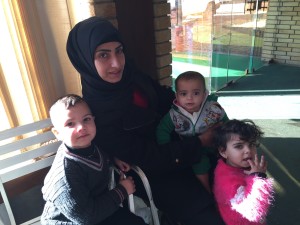 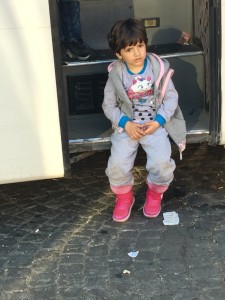 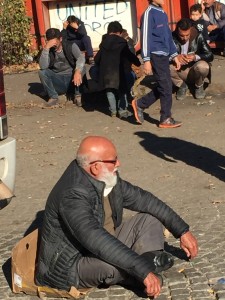 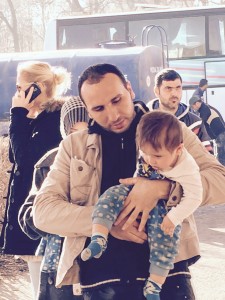 As we make our way back to our buses, we are asked to take a few minutes and speak to a small group of Yazidis standing between a couple of buses. At first we are talking with a couple of women – one an older women and the younger holding a sick child. She said that her legs were so swollen that it was hard to stand. They said that all they words we’d been hearing about all the help provided to them was not true. The authorities had given them nothing. They had to buy everything. And they were super-overcharged for every single thing. For example, earlier we’d been told by others that they’d been charged 40 Euros for a battery for their flashlight so they’d have light. Normally a battery is about 5 Euros.

A young man joined the group and talked about the situation back in Iraq that ultimately resulted in their leaving. He was from a town of about 52,000 where ISIS had taken 5,000 women away and they’d no idea where they are now. 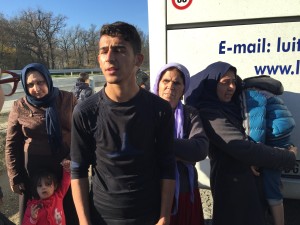 We get back in our buses to continue along the route into Croatia. I will continue with day two in part two of this blog.