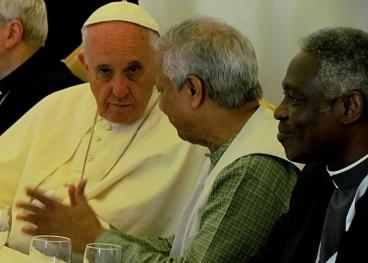 Nobel Peace Laureate Professor Muhammad Yunus was invited by Pope Francis to attend a special meeting of global thinkers organized by the Vatican on “The Global Common Good: Towards A More Inclusive Economy”. The meeting was held at Vatican City from 11-12 July, 2014.

The Catholic Church under the leadership of Pope Francis is seeking to formulate a new economic policy taking into account the spiritual perspective. Pope Francis who has been an outspoken critic of the global economic system took this initiative to hold a consultation meeting on what is needed at the global policy level to overcome the social plagues that humiliate the dignity of the person.

In line with his predecessors, Pope has declared his opposition to the absolute autonomy of markets and financial speculation and to an attitude of indifference that characterizes today’s political, economic and social situation.

The Catholic Church is interested in Professor Yunus’s concept of social business, and his view on the role of selflessness in the economy. He was invited, among other global thinkers, to participate in the discussion. Others who were present in this two day consultation meeting were, among others, Jose Angel Gurria, Secretary General, OECD, Mark Carney, Governor of Bank of England, Michel Camdessus, Former Managing Director, IMF, Ngozi Okonjo-Iweala, Finance Minister of Nigeria, Donald Kaberuka, President of African Development Bank, Vandana Shiva, Environmental Activist, Huguette Labelle, Chairman, Transparency International and Jeffrey Sachs, Director of the Earth Institute of Columbia University, among many others.

The Pontifical Council for Justice and Peace was the organizer of the conference and is a part of the Roman Curia dedicated to “action-oriented studies” for the international promotion of justice, peace, and human rights from the perspective of the Roman Catholic Church.

Professor Yunus highlighted his view on poverty, unemployment and state charity. He explained to the church leaders how we could create a world free from unemployment, poverty, and dependence on state charity through social business. He emphasized that the present conceptual framework of capitalist economy is morally wrong and is based on very narrow interpretation of human beings, which assigns a role which is antagonistic to the unleashing of basic human qualities of sharing and caring.

Pope Francis met the participants and gave his views, also listened to the views of some participants on the closing day of the conference. The high-level consultation gave the opportunity for the distinguished participants, leaders in the respective fields to discuss, exchange views and find solutions which will guide the Catholic Church going forward.

During his stay, Professor Yunus delivered a lecture in the Italian parliament to brief the parliament members and distinguished citizens on “Social Business: A Sustainable way to Solve Society’s Most Pressing Problems” on July 10, at the invitation of the Speaker of the Parliament Hon. Ms Laura Boldrini. Later he had a meeting with Senator Ignazio Marino, Mayor of Rome who was interested in knowing from Professor Yunus about the potential of social business to tackle youth unemployment. Mayor of Rome invited Professor Yunus to help him launch a Grameen microcredit program in Rome similar to the program in NY. He designated the Deputy Mayor to visit Grameen America and consult with Professor Yunus to launch the program as soon as possible.