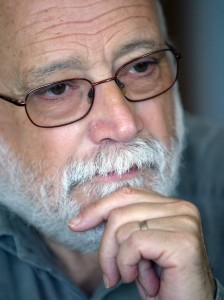 Arcadi Oliveres Boadella was born in Barcelona in 1945. He studied Economics at the Universitat de Barcelona and achieved a PhD in 1993 with his thesis titled: the Defense Economy Cicle. In his thesis he explained the relation between the public expense for military issues and the armament industry. After this, he gained admission to the Department of Applied Economy at the Political Science Faculty at Universitat de Barcelona.

In his younger years, Arcadi was involved in several social and catholic movements, fighting in favour of democratic and the political freedom during the Spanish dictatorship. He was member of the Sindicat Democràtic d‘Estudiants (Democratic Students Union) and during the 70’s he participated in the Assamblea de Catalunya (Assembly of Catalunya). With this association in the summer of 1976, he organized the Marxa per la Llibertat (March for Freedom) all around Catalonia, claiming “Llibertat, Amnistia, Estatut d’Autonomia” (Freedom, Amnesty and Autonomy Statute).

In 1981, Arcadi started to work at the organization called Justicia i Pau (Peace and Justice), a Christian organisation dedicated to promoting human rights and peace. Since then, Arcadi Oliveres has been an active member and in 2001 he was elected president of this organization.

He participated as a teacher of co-organized courses at Catalan Universities in El Salvador, Nicaragua (Universitat Autonoma de Barcelona) and in Bolivia (Universitat Pompeu Fabra). He has been and still is a regular guest on the radio – programmes such as Catalunya Radio, Catalunya Informació, COM Radio, Ràdio-4, Ona Catalan and many others. Apart from his numerous activities, he has also been writing columns for several magazines like Canigó, Serra d’Or, Diari de la Pau, Diari de Sant Cugat and also in Diari Avui. He has participated in more than 60 books and publications.