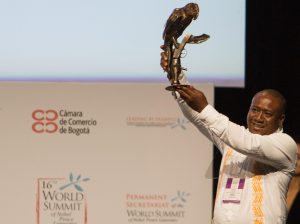 Leyner Palacios lost 32 relatives and friends in 2002 when a cylinder bomb fired by the FARC bursted in a church in Boiaya (Choco) killing 500 inhabitants.

In attempt to rebuild social connections between people after the tragedy Leyner has become an important part of the Committee for the Rights of Victims of Bojayá. This society aimed to protect the rights of the victims of Bojaya and to secure that such a tragedy wouldn’t happen again. Fullfilling his duties as a part of the Committee Leyner Palacios organized a negotiation process with the FARC who made a public acknowledgment of their responsibility for the tragedy and asked community members for forgiveness. Speaking about his achievements and peacebuilding efforts Leyner Palacios stated that “As victims, we never sought for revenge against those who victimized us”.