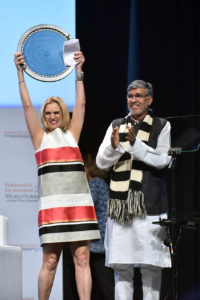 Human rights activist Kerry Kennedy received the Medal for Social Activism for her impactful efforts on communities throughout the world as a result of her life-long devotion to the pursuit of equal justice, the promotion of basic rights and the presentation of the rule of law. She has worked on a range of issues, including children’s rights, child labour, disappearances, indigenous land rights, judicial independence, freedom of expression, ethnic violence, impunity, and the environment. Kennedy has concentrated specifically on women’s rights, exposing injustices and educating audiences about women’s issues, particularly honor killings, sexual slavery, domestic violence, workplace discrimination, sexual assault, abuse of prisoners, and more. She has led hundreds of human rights delegations and has worked closely with several Nobel Peace Laureates who continue engaging today and well before they were awarded with the Nobel Prize. In particular, this Medal recognizes Kennedy’s untiring work with the education curriculum: Speak Truth to Power, which aims at educating kids on human rights and in raising awareness on solidarity and leadership.