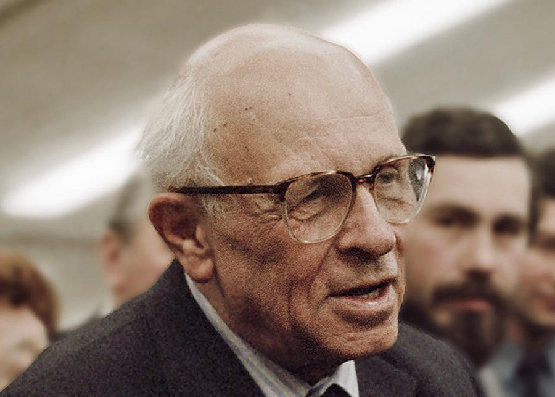 In the years 1948–1968, he worked with a group of renowned scientists on the development of an atomic and hydrogen bomb. In 1950s, motivated by his growing doubts as to the ethical nature of his work, he became involved in the movement for an international ban on the proliferation of nuclear weapons.

He supported the Limited Nuclear Test Ban Treaty (1963), and in 1967 he appealed in a letter to the Soviet authorities to accept the US offer for unilateral withdrawal from plans of developing a anti-ballistic missile defence system; he warned against the consequences of the arms race and the risk of war. The letter met with no response.

A year later, Sakharov expressed his doubts in an essay “Reflections on Progress, Peaceful Coexistence, and Intellectual Freedom”, which first circulated as typewritten copies (samizdat) in USSR, and were later published abroad. Sakharov was declared a dissident and removed from military research.

In 1979, he called for a boycott of Moscow Olympic Games as a sign of protest against the Soviet military intervention in Afghanistan. In 1980s, together with his wife, a human rights activist Yelena Bonner, he was sent into internal exile to the sealed city of Gorky (today known as Nizhny Novgorod). During that period, he went on hunger strike twice, demanding that his wife be allowed to be receive medical treatment abroad.

For his “anti-Soviet activities” he was deprived of all national honorary titles, including the Hero of Socialist Labour title which he had received three times.

In 1988, the European Parliament established the Sakharov Prize for Freedom of Thought, to be given annually to individuals and organisations for their contribution to human rights protection and fight for democracy.