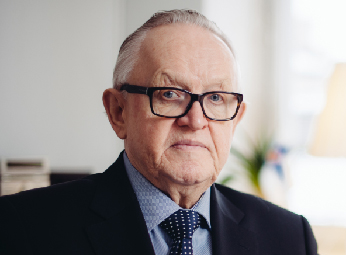 Mr Ahtisaari was awarded the Nobel Peace Prize in recognition of his more than thirty years of work to resolve international conflicts on several continents.

He started a career in diplomacy in 1965 and later became involved in working for the United Nations. In 1972 he joined the Social Democratic Party of Finland. Martti Ahtisaari is a founder of the Crisis Management Initiative.

He was a United Nations Commissioner and the UN Special Representative for Namibia, responsible for, among other things, preparing the country’s first free elections. He supervised the peace process which resulted in Namibia declaring independence in 1990.

President of Finland from 1994 to 2000; during his term the country joined the European Union.

In 1999 he participated in peace talks in Kosovo. Mr Ahtisaari also conducted decommissioning negotiations with IRA in the Northern Ireland and brokered a deal that ended the civil war which had raged for over 30 years in the Indonesian region of Aceh in Sumatra.

Appointed the Special Envoy of the UN Secretary-General to Kosovo in November 2005, two years later Martti Ahtisaari presented a plan to determine the future status of the province.