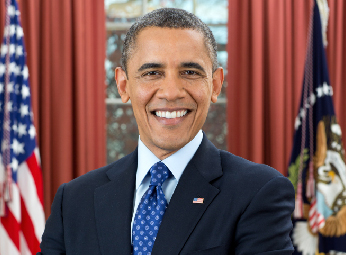 Barack Obama received the Nobel Peace Prize in recognition of his efforts to strengthen international diplomacy, in particular for his work for a world without nuclear weapons.

Mr Obama was born in Honolulu, Hawaii to a mixed-race family. His parents, Ann Dunham from Kansas and Barack Obama Sr. from Kenya, met at a local university. In 1983, he obtained a degree in political science from Columbia University in New York City. In 1991, Barack Obama graduated from Harvard Law School, which he entered at the age of 27.

He worked as a community organiser and local social activist in poor black Chicago neighbourhoods. Afterwards, he started working at a law firm and taught constitutional law at the University of Chicago Law School. Three times elected to the Illinois state Senate, Obama won a seat in the US Senate in 2000. In 2008 Barack Obama won the US presidential election and became the first African American president of the United States. He was re-elected in 2012.

Critics have reproached him for his hardline approach to the war against Islamic terrorism: Obama ordered US special forces to assassinate Osama bin Laden in Pakistan, violating the country’s sovereignty in the process, and US drones have been attacking Pakistani-based Islamists, killing innocent civilians. President Obama has been also criticised for going back on his promise to close down the prison for terrorist suspects in Guantanamo, Cuba.