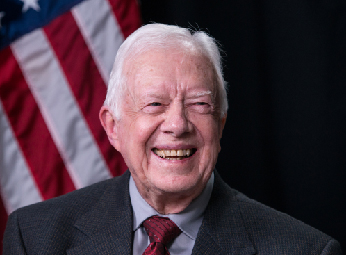 He served as a Georgia state senator (1962-1966) and the Governor (1971-1975). A champion of the civil rights movement and racial desegregation. Carter’s first official act as the President was issuing a blanket pardon for all dissenters who evaded conscription during the Vietnam War.

As President, he put significant emphasis on the respect for human rights on the global arena, making it a condition for keeping good political relations with the US. Jimmy Carter brokered a peace treaty between Egypt and Israel in 1979, signed the SALT II nuclear disarmament treaty and normalised US relations with the People’s Republic of China. He visited the People’s Republic of Poland in December 1977.

After leaving the White House, Jimmy Carter acted on many occasions as a mediator or election observer, for instance in Panama, the Middle East, Haiti, North Korea, Bosnia, Nigeria, the Philippines, Taiwan, Somalia and Indonesia.

He was the first US President to sign official documents with a diminutive of his first name.