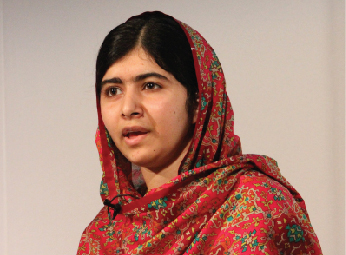 The Nobel Peace Prize 2014 was awarded jointly to Kailash Satyarthi and Malala Yousafzai “for their struggle against the suppression of children and young people and for the right of all children to education”.

Since then she has been shot in the head by the militants and become the youngest person ever to win the Nobel Peace Prize.

She first came to public attention through that heartfelt diary, published on BBC Urdu, which chronicled her desire to remain in education and for girls to have the chance to be educated.

When she was shot in the head in October 2012 by a Taliban gunman, she was already well known in Pakistan, but that one shocking act catapulted her to international fame.

She survived the dramatic assault, in which a militant boarded her school bus in Pakistan’s north-western Swat valley and opened fire, wounding two of her school friends as well.

The story of her recovery – from delicate surgery at a Pakistani military hospital to further operations and rehabilitation in the UK, and afterwards as she took her campaign global – has been closely tracked by the world’s media.

She was discharged from hospital in January 2013 and her life now is unimaginably different to anything she may have envisaged when she was an anonymous voice chronicling the fears of schoolgirls under the shadow of the Taliban.