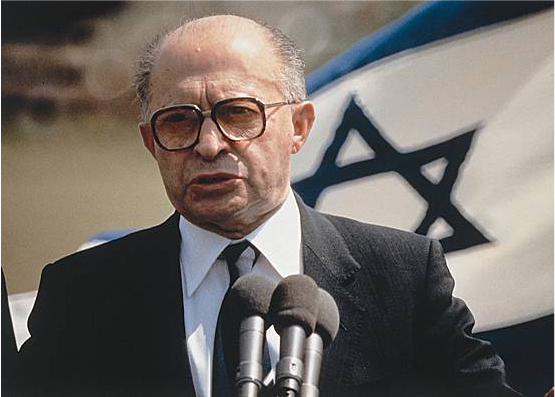 Menachem Begin, at the age of 18 (while living in the newly independent Poland) joined the paramilitary Zionist youth organisation Betar and soon became one of its leading activists. In 1940, he was arrested by NKVD and sent to Siberia. He managed to leave the Soviet Union with the General Anders’ Army and arrived in Palestine. Soon afterwards, he became the leader of Irgun, a secret organisation which fought against Arabs and staged terrorist attacks directed at the British authorities in Palestine.

When the State of Israel was established in 1948, Begin rejected the principle of the division of Palestine put forward by his political rival, David Ben-Gurion, the leader of Mapai (Labour) party. Irgun was transformed into a political party (Herut) which, under Begin’s leadership, had gained popularity, especially among the poorer social classes.

In 1970, Begin left the national unity government and became the leader of Likud, an alliance of all right-wing parties. In 1977, after the Mapai party lost the elections, Begin became the Prime Minister. In Jerusalem, a historic meeting with Anwar Sadat, the President of Egypt, was held which led – with the participation of the American President, Jimmy Carter – to the signing of Camp David Accords in September 1978 and the Egypt-Israel Peace Treaty on 26 March 1979, followed by the withdrawal of Israeli troops from the Sinai Peninsula. On the other hand, in July 1980, the Begin government authorised the annexation of Eastern Jerusalem, and in December 1981, of the Golan Heights captured from the Syrians.

After a couple of heart attacks and the death of his wife Alisa, Begin resigned from office on 29 August 1983 and withdrew from public life. He lived alone until his death.