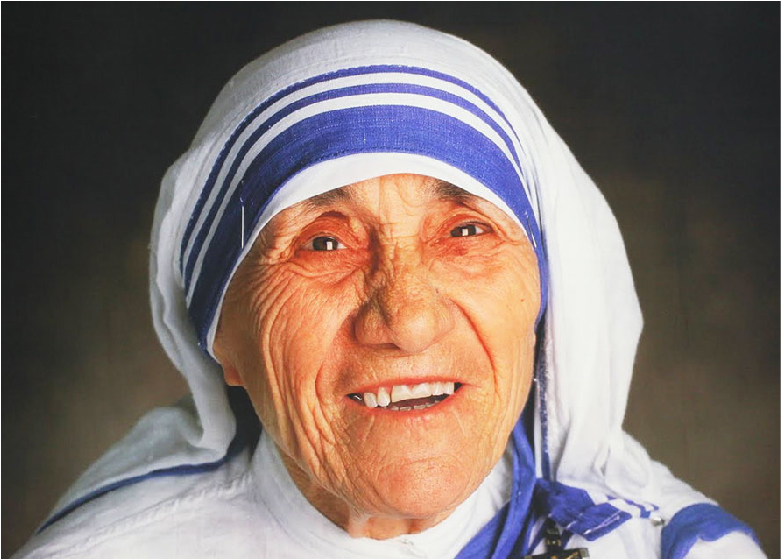 Mother Teresa of Calcutta (born 1910 as Agnes Gonxa Bojaxhiu in an Albanian family; died 1977 in Calcutta), a missionary honoured for her humanitarian work.

At the age of 18, she joined the Sisters of Loreto. She chose to be named after the French Discalced Carmelite, Saint Thérèse of the Child Jesus. Since 1928, she worked as a missionary in Calcutta. In 1948, at the pope’s consent, she left the Institute of the Blessed Virgin Mary (commonly known as the Sisters of Loreto), accepted Indian citizenship and established a new sisterhood, the Missionaries of Charity, which set off on a mission to help the poor, the hungry and lepers, first in India, and then also in Asia, Africa, Europe and the United States.

She left an enormous legacy. Long after her death, there are still approx. 600 missions in 120 countries around the world, including hospices, homes for people suffering from HIV/AIDS, leprosy and tuberculosis, for the disabled, the old, the poor and the homeless, soup kitchens, children and family counselling programmes, orphanages and schools.

She claimed she had just served God, and the love and care she showed towards abandoned people gave her great joy and fulfilment. She believed that apart from poverty and hunger, the biggest problems of the world are loneliness and neglect of other people.

She was criticized for not informing the donors about the specific use she made of their donations. Her critics also claimed that her actions were not aimed at relieving poverty, but at evangelisation. For most of her life, she “struggled with God”, experiencing the “dark night of the soul”. She was beatified in 2003.