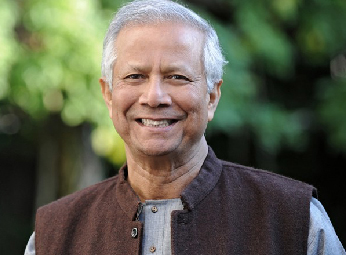 Nobel Laureate Professor Muhammad Yunus is the father of both social business and microcredit, the founder of Grameen Bank, and of more than 50 other companies in Bangladesh. For his constant innovation and enterprise, the Fortune Magazine named Professor Yunus in March 2012 as “one of the greatest entrepreneurs of our time.”

In 2006, Professor Yunus and Grameen Bank were jointly awarded Nobel Peace Prize.
Professor Muhammad Yunus is the recipient of 55 honorary degrees from universities across 20 countries. He has received 112 awards from 26 countries including state honours from 10 countries. He is one of only seven individuals to have received the Nobel Peace Prize, the United States Presidential Medal of Freedom and the United States Congressional Gold Medal. Other notable awards include the Ramon Magsaysay Award (1984), World Food Prize (1998), The Prince of Asturias Award for Concord (1998), Sydney Peace Prize (1998) and the Seoul Peace Prize (2006). In Bangladesh he got President’s Award in 1978 for introducing an innovative organisation in agriculture. He was awarded the Independence Day Award in 1987, by the President of Bangladesh for the outstanding contribution in rural development. This is the highest civilian national award of Bangladesh.

In 2006, Time Magazine listed Professor Yunus under “60 years of Asian Heroes” as one the top 12 business leaders. In 2008, in an open online poll, Yunus was voted the 2nd topmost intellectual person in the world on the list of Top 100 Public Intellectuals by Prospect Magazine (UK) and Foreign Policy (United States). In 2010, The New Statesman (UK) listed him as one of “The World’s 50 Most Influential Figures”.

Professor Yunus has appeared on The Oprah Winfrey Show, The Daily Show with Jon Stewart, Colbert Report, Real Time with Bill Maher, Hardtalk on BBC and The Simpsons. Financial Times chose Professor Muhammed Yunus as one of six Finance Pioneers. In the March 31, 2015 issue in an article entitled “Business Pioneers in Finance” Professor Yunus has been placed alongside Warren Buffett, Amadeo Giannini, Henry Kravis, J.P Morgan, and Mayer Amschel Rothschild as greatest business finance pioneers of all time. He has appeared on the cover of Time Magazine, Newsweek and Forbes Magazine.