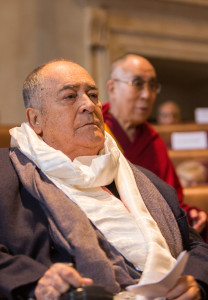 Bernardo Bertolucci has been chosen as the Peace Summit Award 2014 Laureate recipient. Bernardo Bertolucci film director of dreams, memory, and beauty, won 9 academy awards for his masterpiece The Last Emperor. His work as in 1900 has kept the memory of our tragic modern history alive. His films have helped millions of viewers to discover the cultures and traditions of far away worlds: and while breaking down walls of ignorance and discrimination, and with an eye always attentive to human rights, his films have given to the story of the individual a universal resonance. In the process, he has illuminated the oppression of entire peoples. His work is characterized not only by its acknowledged beauty, but also by a constant civic commitment. He has continued this work in recent times by advocating for ways to make cities more livable and accessible to his fellow disable citizens

The Award ceremony was held in the Capitol Hill in Rome on December 15th with the presence of all the Laureates that were a part of the Summit.