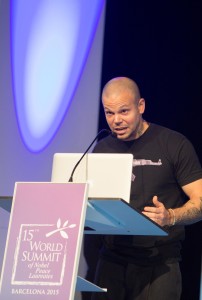 Rene Perez is the lead singer of Calle 13, winner of the urban hip hop and rap sound. They have won 19 Latin grammy in 2011 and 5 in 2014, the nobel of music. The most laureate urban band music. Born in Puerto Rico and based in New York they have campaign with Amnesty International and UNICEF. This very young band represent the youth of the Latin American continent that strive for a better world. They have campaign against the war in Afghanistan, Irak and Siria. They have defended Latin American unity against foreign intervention and they fight for soverignity, first and foremost of Puerto Rico. They have publicly denounced the coup d’etat in Honduras in 2009 and defended grassroots democratic movements. They keep alive the historic struggle of those who fight for a better world like the massacre of in the square of three cultures in mexico 1968. A very young urban band that sink its roots in the fight for democracy in latin america as well as social justice. They have plaid freely for the madres de la plaza de mayo in Argentina and they have openly campaign against demilitarisation and to stop arms trafficiking. This is only a short example of why the Laureates of the Nobel Peace Price want to thank Rene Perez of Calle 13, Residente of the barrio!