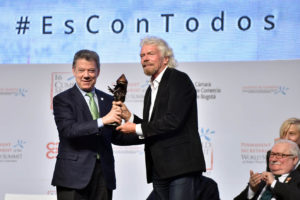 “One of the most important aspects of building peace in Colombia will be fostering entrepreneurship and creating opportunities for our young people,” said Santos. “Richard Branson is not only an internationally admired entrepreneur but has supported and encouraged young entrepreneurs and bright thinkers in Africa and other regions of the world where they can make real change. Through his work with his foundation, which has had global impact, he has also proven to be a true peace builder himself. “Richard sets an example for our young people not only as a very successful businessman, but as one who also uses that success for the good of others.”

Branson, who heads one of the world’s most respected and recognized brands in travel, mobile telephony, leisure living and more, founded Virgin Unite in 2004. The foundation has incubated programs and created networks to come up with entrepreneurial solutions to global issues including The Carbon War Room, The B Team, Ocean Unite, The Elders and the Branson Centre of Entrepreneurship, which trains and mentors entrepreneurs in Africa, the Caribbean and elsewhere. Branson has been outspoken on the failed war on drugs, the fight for universal abolition of the death penalty, and his support of refugees caught in the current crisis.