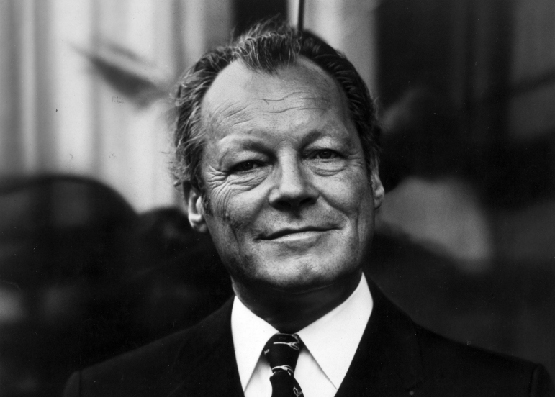 Brandt joined the Social Democratic Party of Germany (SPD) in 1930. Three years later, after Hitler’s rise to power, he left Germany for Norway, and then Sweden, where he took an active part in the activities of anti-Nazi opposition. After the war, he served as the Mayor of West Berlin and the Minister of Foreign Affairs in the grand coalition (CDU/SPD) government.

In 1969, he became federal Chancellor and the leader of coalition government composed of SPD and the liberal FDP. He initiated the policy of détente and reconciliation with the countries of Central and Eastern Europe. On 7 December 1970, he signed an agreement with the authorities of the People’s Republic of Poland under which the Federal Republic of Germany accepted the western boundary of Poland. During his official visit to Warsaw he spontaneously knelt down while laying a wreath at the monument to victims of the Warsaw Ghetto Uprising. The photograph of the kneeling politician went around the world.

Signing the peace treaty with Poland, Brandt showed great courage, as most Germans of his time were strongly against the boundary along the Oder–Neisse line.