The President of the Permanent Secretariat of the World Summit of Nobel Peace Laureates, Ekaterina Zagladina signed an MOU with one of the leading Colombian universities, The University of Cartagena, to launch the educational program of the Summit, titled “Leading by Example” at the University. 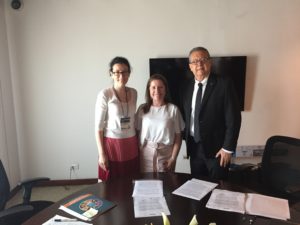 The Educational Curriculum for adoption in University Courses was developed by the team of the Summit in the last two years, building on demonstrated success in connecting youth to the teachings and courageous examples of the Nobel Peace Laureates.

The curriculum is based on a fifteen-week education model and has been developed and reviewed by doctoral-level professors from all over the globe, with feedback from professors attending the World Summit of Nobel Peace Laureates. The curriculum brings to the classroom real-world scenarios in which students are engaged as leaders, responding to a range of global challenges that the world faces today. Specially designed for university courses, the curriculum provides flexibility so that it may be adopted appropriately and freely within any given classroom setting. 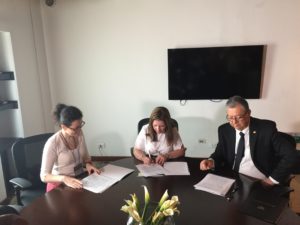 According to Ekaterina Zagladina, “the program “Leading by Example” is built around the philosophies and activities of Nobel Peace Laureates, and teaches students that every person can make significant changes in their respective local community, or become a social leader and a key figure on at international level when it comes to peacebuilding. We are delighted to partner with the University of Cartagena as we strongly believe that Colombian youth are energized by the Peace Process, as they have already been actively engaged in it. We look forward to supporting their activities, and voices, by providing them with these useful tools and strategies in peacebuilding, real world case studies, and inspiration”.

While going through educational program, students are exposed to a deep and meaningful history of the peacebuilding movement and activities. They will also have a unique opportunity to develop their own local and/or global social project with the support of their professors and course mentors. These projects aim to help students directly engage in work that yields positive, and often tangible, results in their local, national, or global communities. The Permanent Secretariat, along with global peace leaders, support these achievements and initiatives of the students. The most promising project of the year, as determined by the Leading by Example team, with final approval from the Nobel Peace Laureates, can be awarded the Turner Social Change Prize at the next World Summit of Nobel Peace Laureates — a $10,000 grant award initiative.

The Leading by Example educational curriculum is officially available for implementation in Academic Year 2018-19, and Colombia will be the first country to launch due to the joint work of the PermSec with the Human Rights Comissioner of the Presidency of the Republic. The Permanent Secretariat hopes that this initiative will be supported by other universities in Colombia and throughout the world.

←  After 70 years Of Ethnic Cleansing And Global  Complicity  – Are We Racist? Leymah Gbowee Has Been Included In 100 Most Influential People in Gender Policy in 2018 →