Three members of the International Base Team of the 2nd World March for Peace and Nonviolence were received by Mr. Vladimir Polyakov at the headquarters of the Gorbachev Foundation in Moscow, in the afternoon of yesterday, February 10. Montserrat Prieto, from Spain, Sandro Ciani, from Italy and Deepak Vyas, from India, are part of an international team of volunteers that travel the world since October 2, 2019, in an attempt to show that it is possible to work together for a better world. The meeting also was attended by representatives of the Youth Program of the World Summit of Nobel Peace Laureates, an initiative that was launched by Mikhail Gorbachev in 1999. 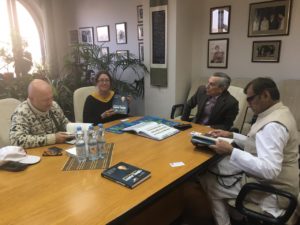 The March gathers the initiatives of local teams from different cities, associations, institutions and persons who want to support each other in their efforts to achieve common goals like nuclear disarmament, environmental consciousness, non-discrimination or nonviolence.

The 1st World March took place 10 years ago and travelled 90 countries for 90 days, with the participation of more than 3000 associations and institutions from all over the world. This 2nd one is now in its 132 day and still have 28 more ahead to travel Europe before ending up in Madrid on March 8, 2020.

This meeting was the first contact of what both parts hope to become a long-lasting relationship convinced that, as Mr. Gorbachev wrote to Sri Chinmoy, “there is only one way for us: the way of peaceful cooperation and friendship. Other way leads to abyss. We should face global challenges with open eyes and do everything to overcome them”.