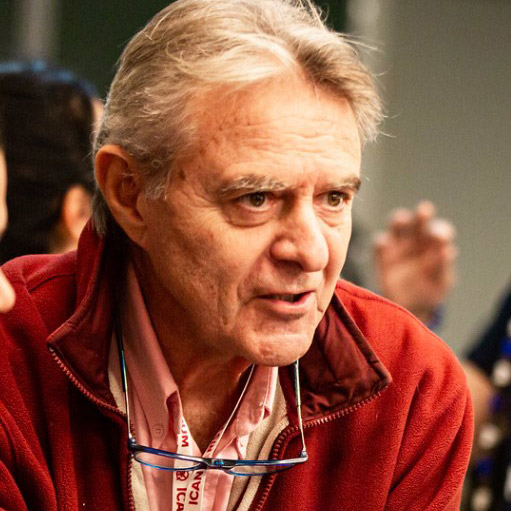 Rafael de la Rubia Moreno-Sierra, is an humanist and a social activist for nonviolence who has been militating and spreading the ideas of Peace and Nonviolence for more than 50 years.
His academic background is in Mathematics and computer science. In his professional field, he has been a bookseller, printer, editor, literary agent, compiler and writer. He is the author or co-author of 13 books.
Exiled in Chile as a young conscientious objector in 1973, he witnessed General Pinochet coup and was arrested several times and expelled from the country by the government of the dictator under the charges of being a humanist and promoting the “Peace is Strength” campaign. Sent back to Spain, under the dictatorship of General Franco, he was tried for desertion in a court-martial being finally acquitted but held in Melilla (Africa) for the duration of his military service. This was the beginning of a life devoted to disseminating the ideas of Peace and Nonviolence. He lived in Moscow between 1990 and 1997, in the period of the end of the U.R.S.S. and the beginning of the Russian Federation. Since 1998 he established his residence in Spain (Toledo and Madrid) although his activities have led him to spend long periods of time in more than 80 countries. He is the founder of the association World without Wars and Violence (MSGySV for its acronym in Spanish) which is currently working in 32 countries with the recognition of the ECOSOC of the United Nations, and the Humanist Forum of Education that works mainly in Latin America and Spain, and was also the creator and promoter of the World March for Peace and Nonviolence, that has travelled the world twice so far (the 1st time for 100 days in 2009 and the 2nd in 2019 for 159 days) and has launched the 3rd MM for 2024, among many other actions: He is a member of the MSGySV global coordination team.