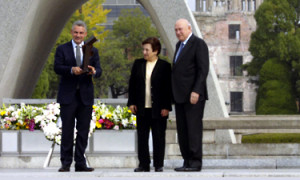 One of the  leading activists for the release of Aung San Suu Kyi – received  Peace Summit Award 2010, in Hiroshima on 14 November, during the 11th World Summit of Nobel Peace Laureates. Roberto Baggio was chosen for his support to several important activities in favor of Hospitals, Foundations and Charities in many countries of the world – raising funds for the earthquake that occurred in Haiti, providing financial support to projects to help the island recover, calling to save the lives of people affected by the Nargis Cyclone in Burma and in support of the fight against bird flu, which has sparked a dangerous and deadly epidemic in Laos.