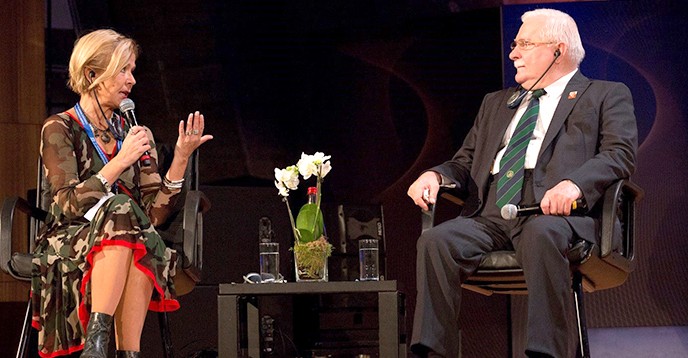 The intervention of Lech Wałęsa, Nobel Peace Prize laureate in 1983 and former President of the Republic of Poland, closed this Wednesday, 1 November 2017 the Leaders’ Forum of the 39th session of the General Conference of UNESCO, before an audience composed of delegations from Member States, intergovernmental organizations, NGOs and the press.

Organized in cooperation with the Permanent Secretariat of the World Summit of Nobel Peace Laureates, this intervention took the form of an open conversation between Lech Wałęsa and Liv Torres, Executive Director of the Norwegian Nobel Peace Center, around a central theme today: “Peace and justice: the path of humanity towards sustainable development”.

At a time when the international community is mobilized for the implementation of the 2030 Agenda for Sustainable Development, Mr Wałęsa shared some words of wisdom and suggestions for the world to move forward while leaving no one behind, and recalling the potential of “soft power” that UNESCO propagates through its action. 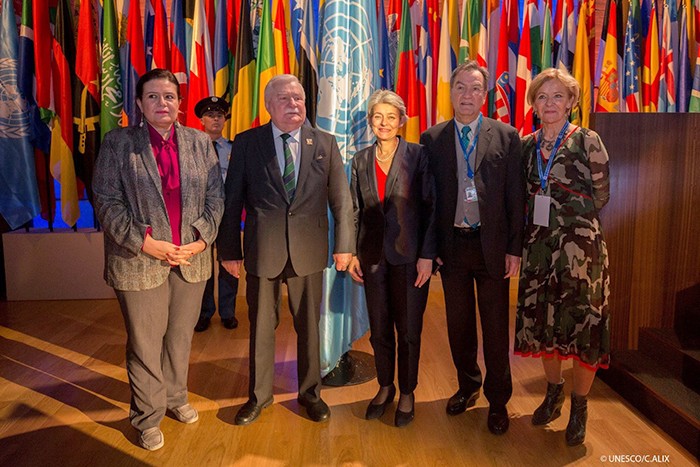 Director-General Mrs Irina Bokova noted that Lech Wałęsa’s global commitment to peace “is not limited to a political mandate – it is the fight of a lifetime”. Indeed, beginning his peaceful struggle for democracy in 1960, Mr Lech Wałęsa remains today an inspiration for the new generations. He embodies with his experience the realization of a real peace around the world.

Mr Wałęsa recalled that his generation has been engaged in suppressing cultural and political divisions as well as inequalities that unfortunately are resurging in the world in new forms. To respond to threats that jeopardize democracy and, in addition, peace and justice, he believes that UNESCO has a crucial role to play in ensuring global stability and the recovery of certain universal values.

UNESCO is helping to diagnose and implement a more inclusive international policy, Wałęsa added. It must continue its efforts to unite by identifying common issues and in doing so, further encouraging education, science and culture to foster a harmonious development of societies as envisaged by the 2030 Agenda.

The Permanent Secretariat of the World Summit of Nobel Peace Laureates is an independent, non-profit, non-governmental organization created in 2006, based in Rome and operating on a permanent basis. It organizes the Summit in different locations across the globe with the support of a number of Nobel Peace Laureates’ foundations and organizations, and in partnership with hosting municipalities and prominent local foundations. The Permanent Secretariat was able to organize this Conversation with Lech Wałęsa thank to a generous contribution of Albert Schweitzer Institute, an organization based in the Quinnipiac University, United States of America, which runs national and international programmes promoting education, ethics and voluntarism.