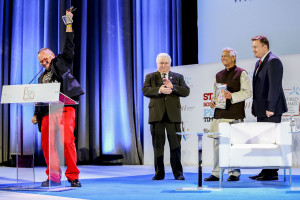 Jerzy Owsiak, co-founder and the Board President of the Great Orchestra of Christmas Charity, is to receive the Peace Summit Medal for Social Activism, distinction presented by the World Summit of Nobel Peace Laureates. Mr Owsiak will be awarded the Medal in recognition of his long-standing social and charitable work as well as his active support for the development of the Polish medicine. The award will be presented on 21 October, during the ongoing 13th World Summit of Nobel Peace Laureates in Warsaw.

The Peace Summit Medal for Social Activism is an initiative developed as part of the annual World Summits of Nobel Peace Laureates. The Medal has been awarded by the Peace Nobel Laureates since 2012. The first recipient of the distinction was Michaela Mycroft, praised for her commitment to the rights of children with disabilities in South Africa.

Jerzy Owsiak is to be honoured for his long years of social and charitable work and the active support he has provided to the development of Poland’s medical care system. The Medal will be presented on 21 October at 11 am in the Congress Hall of the the Palace of Culture and Science, at the end of the panel “Stand in Solidarity for Peace and Security”. The distinction will be personally bestowed by the President of Poland, Lech Wałęsa, and Muhammad Yunus, 2006 Nobel Peace Prize Winner.

“It is a great honour to be awarded the Medal, which is a result of 22 years of enormous effort many people have put into the idea of the Great Orchestra of Christmas Charity,” notes Mr Owsiak. “I consider this prestigious distinction as not only praise for the hundreds of volunteers and organisers but also our partners: doctors, experts, paramedics and, last but not least, the thirty‑strong team of the Foundation’s Office who run the spontaneous and often unpredictable project of the Great Orchestra”, he adds.

“Jerzy Owsiak is a prominent social activist who roused Poles’ emotions and a selfless willingness to help the needy. The award will be received by a person greatly respected and popular among his compatriots”, said President Lech Wałęsa.

Jerzy Owsiak is a founder and President of the Board of the Great Orchestra of Christmas Charity Foundation. He is the mastermind and driving force behind the annual Grand Finale of the Great Orchestra of Christmas Charity as well as a creator of the Woodstock Festival, one of the biggest live music events in Europe. For two decades, the Foundation has been changing the face of Polish medicine. During that time, the charity delivered 20,000 modern medical devices to Polish hospitals, a gift valued at nearly $155 million.

← Message of President Barroso for the Opening ceremony of the Summit Special edition of the Civic Academy with Nobel Peace Laureates! →