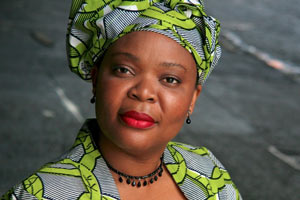 Leymah Gbowee organised a movement of Christian and Muslim women that in 2003 brought to an end the civil war in Liberia. As a volunteer in the aid programme for victims of the first Liberian civil war (1989-1996) she worked with former child-soldiers of Charles Taylor’s army and was engaged in other peace-making activities. According to her own account, at that time she realised that “if any changes were to be made in society it had to be by the mothers”.

In 2002, Ms Gbowee became a spokesperson and leader for Women of Liberia Mass Action for Peace, an organisation for women across ethnic and religious divide lines. During months of peaceful protests, the women organised a series of actions to end the violence in the country, including a sex strike which attracted a significant media coverage. The activists were received by Taylor in April 2003, just months before the August peace treaty which ended the long civil war.

Gbowee supported Ellen Johnson Sirleaf and endorsed her candidacy during the successful re-election campaign in 2011, only to accuse the President of corruption and nepotism in the next year.