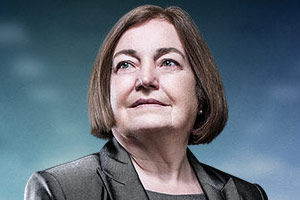 Mairead Maguire was awarded the Nobel Peace Prize in l976 for her  work for peace and a nonviolent solution to the ethnic/political conflict in Northern Ireland – an award she shares with Betty Williams.   The two women, along with journalist Ciaran McKeown organized massive peace demonstrations and founded the Peace People, a movement committed to building a just and peaceful society through nonviolent social action and a rejection of ‘the bomb and the bullet and all the techniques of violence’.

Mairead currently serves as Hon. President.  Since receiving the Nobel Prize, she has dedicated her life to promoting nonviolence  and disarmament, both in Northern Ireland and around the world, having recently returned from Afghanistan where she called for an end to the Afghan war.

Mairead is a member of the International  Peace Council, Vice-Chair of the Nobel Womens Initiative, and a member of the Global Nonkilling Movement.   Her book ‘The Vision of Peace; faith and hope in Northern  Ireland’ has been published in several languages.

She travels regularly to Israel and Palestine to support peace activists working  in the region for a nonviolent solution to the conflict. As a Jury Member of Russell Tribunal on Palestine, she supports Palestinians right to self-determination and has sailed a number of times on the Free gaza flotillas to break the siege and bring humanitarian supplies to Gaza.

Mairead is an active pacifist and believes that violence  and wars will end when we  abolish armies and base our societies, not on violence or the threat of violence, but on Human rights and International laws.