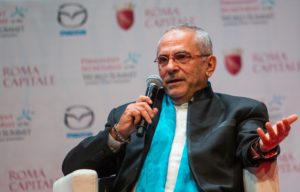 Nobel Peace Laureate 1996, Jose Ramos-Horta, won the Nobel Peace Prize together with Bishop Carlos Felipe Ximenes Belo for their work towards a just and peaceful solution to the conflict in East Timor. East Timor, a former Portuguease colony, had been occupied by Indonesia until 1999. The country was later administered by the UN, ultimately to regain independence in 2002.

Jose Ramos-Horta was the first Minister of External Relations of East Timor and later served as the country’s Prime Minister (June 2006-May 2007). Before serving his country as President, Dr. José Ramos-Horta was known internationally as a peacemaker. In exile from his country for the better part of three decades, he had been the international voice of the Timorese people while they fought for survival against one of the most brutal regimes of our time. He was the President of East Timor until 20 May 2012. In 1988 Ramos-Horta resigned his membership in the Revolutionary Front for an Independent East Timor and became an independent politician, though he continued to work with the Front, representing the organisation as a Permanent Representative to the United Nations.

In 2008 President Ramos-Horta survived an assassination attempt by members of the renegade military group. On the President’s return to office, the country entered a new phase, a phase of putting conflict behind them, and building a new country José Ramos-Horta’s work in taking his country from devastating conflict to peace and economic growth in just over a decade serves as a model for building democracy in the twenty first century. Now free to move back onto the international stage, in 2012 he accepted an appointment from the UN Secretary General as Special Representative of the Secretary General to the African nation of Guinea Bissau.

“More than half a century after the Jewish holocaust and centuries after the genocide of the indigenous peoples of Australia and the Americas, the same attitude that has allowed these crimes to take place persists today. Like the Jews and Armenians in the past, like the Kurdish, Gypsies, Tibetans, Aborigines of Australia, Maoris of Aotearoa (New Zealand), Kanakis of New Caledonia, the peoples of Western Sahara, and the Indigenous peoples of the Americas, the East Timorese are a mere footnote of history, an expendable people.”

“In most cases the demands are not for secession. They are about their survival as a people with a language and a culture, with their land and environment protected from rapacious multinationals. Only when these basic demands are not met has there been recourse to other forms of struggle with an escalation in their demands.”

“No country, no matter how rich and endowed with natural resources, is an island unto itself. In an increasingly smaller world and competitive age, where modern electronic communications break the barriers of silence erected by dictators, Indonesia cannot continue to flout the right of the people of East Timor to self-determination and the rule of law in Indonesia.” – Nobel Peace Lecture, Jose Ramos-Horta