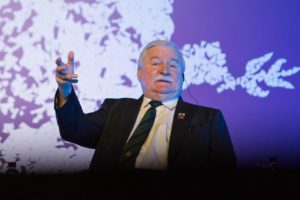 Lech Walesa, a politician, former chairman of the independent self-governing trade union “Solidarity” and President of the Republic of Poland. He was awarded the Nobel Peace Prize in 1983 for his efforts to resolve the nation’s problems through negotiations and working together without violence.

He was prevented from accepting the prize in person by the authorities of the People’s Republic of Poland. During the ceremony in Oslo, he was represented by his wife Danuta and his 13-years-old son Bogdan. In 1970, Wałęsa joined the strike committee at the Gdańsk Shipyard. In 1978, he was one of the founders of the Free Trade Unions of the Coast. In August 1980, he became the leader of the Inter-Plant Strike Committee at the Gdańsk Shipyard, and on 31 August, he signed the Gdańsk Agreement. In the years 1980-1990, he was the Chairman of the “Solidarity” Trade Union, which he co-founded. In the years 1981-1982, he was interned by the Communist authorities. In 1986, Mr Wałęsa participated in the founding of the Provisional Council of the Solidarity Trade Union. A year later he was appointed the head of the National Executive Committee of the Solidarity Trade Union. An organiser of the 1988 strike at the Gdańsk Shipyard, in 1989 he was the leader of the opposition during the Round Table Negotiations with the government of the People’s Republic of Poland. In December 1990, Lech Wałęsa was elected the President of the Republic of Poland. He remained in the office for one term, until 1995.

“We shall not yield to violence. We shall not be deprived of union freedoms. We shall never agree with sending people to prison for their convictions. The gates of prisons must be thrown open and persons sentenced for defending union and civic rights must be set free.”

“In many parts of the world the people are searching for a solution which would link the two basic values: peace and justice. The two are like bread and salt for mankind. Every nation and every community have the inalienable right to these values. No conflicts can be resolved without doing everything possible to follow that road. Our times require that these aspirations which exist the world over must be recognized.”

“I think that all nations of the world have the right to life in dignity. I believe that, sooner or later, the rights of individuals, of families, and of entire communities will be respected in every corner of the world.” – Nobel Peace Lecture, Lech Walesa