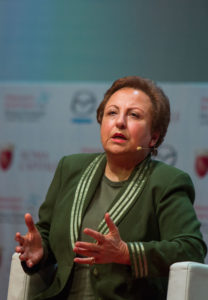 A graduate of the Faculty of Law, Tehran University, and one of the first female judges in the country, Ms Ebadi presided over a municipal court in Tehran. After the 1979 Islamic Revolution, she was forced to resign. In 1992, she opened her own law practice and became an attorney. Shirin Ebadi represented many oppositionists before Iranian courts. She was also involved in defending the rights of refugees. Since June 2009 she has been in exile in the UK, forced to leave Iran because of mounting persecution of the regime’s critics. In 2004 she appeared on Forbes list of the World’s 100 Most Powerful Women.

“Undoubtedly, my selection will be an inspiration to the masses of women who are striving to realize their rights, not only in Iran but throughout the region – rights taken away from them through the passage of history. This selection will make women in Iran, and much further afield, believe in themselves. Women constitute half of the population of every country. To disregard women and bar them from active participation in political, social, economic and cultural life would in fact be tantamount to depriving the entire population of every society of half its capability. The patriarchal culture and the discrimination against women, particularly in the Islamic countries, cannot continue for ever.” – Shirin Ebadi, Nobel Peace Lecture