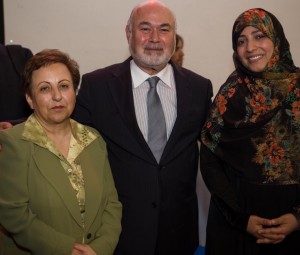 Senior Advisor and Representative to the UN

Mr. Jonathan Granoff, an international lawyer, serves as a Special Representative to the United Nations for the Permanent Secretariat of the World Summit of Nobel Peace Laureates. He is the President of the Global Security Institute, Chair of the Task Force on Nuclear Nonproliferation of the International Law Section of the American Bar Association, and Ambassador for Peace and Security of the Parliament of the World’s Religions. He focuses his advocacy efforts on the legal, moral, political and spiritual dimensions of peace with a particular emphasis on the rule of law and the elimination of nuclear weapons.  An award winning screenwriter, he is a widely published scholar and serves on numerous advisery and governing boards such as the NGO Committee on Disarmament, Peace and Security at the UN, Lawyers Committee on Nuclear Policy, Middle Powers Initiative, Parliamentarians for Nuclear Nonproliferation and Disarmament, and the Jane Goodall Institute. He is a Fellow in the World Academy of Arts and Science and recipient of numerous awards such as the Arthur E. Armitage, Sr. Distinguished Alumni Award of Rutgers University School of Law. He has represented the Nobel Laureate organization the International Peace Bureau at Summits and was nominated for the Nobel Peace Prize in 2014.

Favorite quote: “We can let the circumstances of our lives harden us so that we become increasingly resentful and afraid, or we can let them soften us, and make us kinder: We always have the choice.” – Dalai Lama