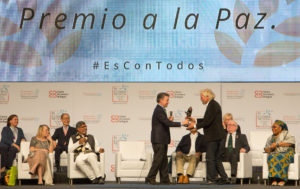 The 16th World Summit of Nobel Peace Laureates in Bogota, Colombia last week supported the country’s new peace accord and honored Sir Richard Branson, Founder of the Virgin Group, with a peace award for his work in global peace building.

The Peace Summit Award was presented on Saturday, February 4, by Colombian President and 2016
Nobel Peace Prize laureate Juan Manuel Santos, joined by the 26 Nobel laureates and Nobel laureate
groups attending the World Summit of Nobel Peace Laureates. The Summit, founded by Mikhail Gorbachev and now in its sixteenth year, presents the Peace Summit Award each year to an artist or leader who has made significant contributions to peace building and human rights. Former recipients include musicians Bono, Peter Gabriel, Bob Geldof, and Annie Lennox, actors George Clooney and Don Cheadle, and others. 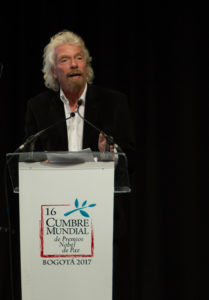 “One of the most important aspects of building peace in Colombia will be fostering entrepreneurship and creating opportunities for our young people,” said Santos. “Richard Branson is not only an internationally admired entrepreneur but has supported and encouraged young entrepreneurs and bright thinkers in Africa and other regions of the world where they can make real change. Through his work with his foundation, which has had global impact, he has also proven to be a true peace builder himself.

“Richard sets an example for our young people not only as a very successful businessman, but as one
who also uses that success for the good of others.”

Branson, who heads one of the world’s most respected and recognized brands in travel, mobile
telephony, leisure living and more, founded Virgin Unite in 2004. The foundation has incubated programs and created networks to come up with entrepreneurial solutions to global issues including The Carbon War Room, The B Team, Ocean Unite, The Elders and the Branson Centre of Entrepreneurship, which trains and mentors entrepreneurs in Africa, the Caribbean and elsewhere. Branson has been outspoken on the failed war on drugs, the fight for universal abolition of the death penalty, and his support of refugees caught in the current crisis.
Over a decade ago Branson and Grammy Award-winning musician Peter Gabriel conceived of a small, dedicated group of global leaders who could use their collective experience and influence to help tackle some of the world’s most pressing problems. In July, 2007 they and former South African President Nelson Mandela and his wife Graca Machel, launched The Elders (http://www.theelders.org/), with Archbishop Desmond Tutu, former US President Jimmy Carter, former UN Secretary General Kofi Annan and other Nobel laureates and global leaders. The group is approaching its tenth anniversary.

Ekaterina Zagladina, President of the Summit’s Permanent Secretariat, said that the laureates are “particularly happy this year to award Mr Branson for his effective peace making and peace building efforts. Through the Edlers he, Peter Gabriel and their partners have brought Nobel laureates and other leaders together to address some of the world’s most complex conflicts. His other initiatives reflect and support the values that the Nobel laureates have dedicated their lives to. He is clearly one of the team effectively working to make the world a better place.”

Branson has his own words of support for Colombia. “The Colombian peace process is sending a badly needed message of hope, showing us all the power of forgiveness and reconciliation in making our world a better place,” he said. “This year’s gathering of Nobel Peace Prize laureates in Bogota gives further recognition and support to the remarkable journey the Colombian people have embarked on. I am humbled to be a part of this historical event, and deeply honored by this award.”