“We are extremely pleased to present the book Being Nobel by our Permanent Secretariat colleague, Livia Malcangio, as one of the main tools of our educational programme “Leading by Example”. This fascinating and informative book recounts the gripping stories of recent Nobel Peace Laureates and other extraordinary personalities, all committed to a future in which equality and freedom from oppression are the rule, rather than the exception. Through the many emotional and uplifting interviews with the author – in which these humanitarians eloquently discuss theirmotivations, their lives, and their work – the reader will find true inspiration and several common traits: courage, dedication, and selflessness. This book will serve as an invaluable tool for the Summit’s participants and the schools connected to the Leading by Example programme.”With this words, President of the Permanent Secretariat of the World Summit of Nobel Peace Laureates Ekaterina Zagladina, describes the educational book Being Nobel, distributed at each Summit to all students gathering from all over the world.

“I am proud to support the Nobel Peace Summit’s educational program“Leading by Example” that is also based on the book Being Nobel by Livia Malcangio. Peace education is one of the most fundamental tools to enhance a healthy society, and this is a book that not only inspires, but also teaches. It will serve as a beacon to young generations, that’s why I encourage as many students as possible to read this book and to become leaders following the example of the Nobel Peace Laureates.”says the Governor of Yucatan Mauricio Vila Dosal about the book, convinces that educating on peace and non violence shall start in the schools. 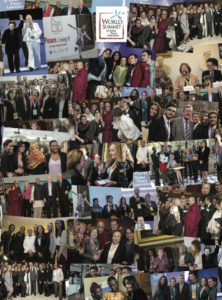 “The recipients of ‘the world’s most prestigious prize’ are people indeed worth listening to. They have the will to make the world a better and more peaceful place, with an idea of how to do it, and with the courage and endurance to make it. That is what Being Nobel is about,” states Liv Tørres, Executive Director of the Nobel Peace Center in Oslo, who is also actively participating in the Nobel Peace Summit in Merida as a master of contents and moderator at two panels with the Nobel Peace Laureates.

The book’s cover changes for each Summit with different Nobel Peace Laureates. For this edition of the book to be distributed in Merida, the spotlight will be on Mayan Rigoberta Menchu, Nobel Peace Prize 1992 from Guatemala and UN Ambassador for the rights of indigenous people, and the late Mexican diplomat Alfonso Garcia Robles, Nobel Peace Prize 1982, who conceived the Treaty of Tlatelolco where they, together with other Latin American countries, agreed not to manufacture nuclear weapons and to limit its nuclear technology for peaceful purposes only.