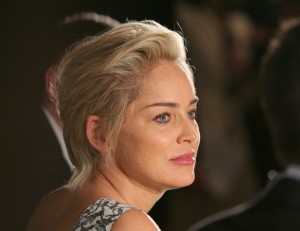 Sharon Stone has been chosen as the Peace Summit Award 2013 Laureate recipient. This was decided by the Committee that each year chooses the man or woman of Peace who will be awarded by the Nobel Peace Laureates during the each edition of the World Summit of the Nobel Peace Laureates.
The Award is bestowed for “her activities that brought solidarity and new hope to the millions of people who have fought and are fighting against the tragedy of HIV / AIDS.”

In her acceptance, Sharon Stone writes to the Nobel Laureates: “Thank you for this extraordinary honor, the consideration of Which alone is life changing. I accept with joy, your nomination and gladly declare my intention to attend the Awards Ceremony. It will be my pleasure to attend the XIII World Summit of Nobel Peace Laureates and my honor to Represent you all with integrity and grace”.

The Award ceremony will be held in the National Opera in Warsaw on October 23rd with the presence of all the Laureates that will be a part of the Summit : HH The Dalai Lama, Lech Wałęsa , Frederick Willem De Klerk ,Mikhail Gorbachev, Muhammad Yunus , Mairead Corrigan Maguire , Betty Williams, Shirin Ebadi and the leaders of the most important Nobel organizations.

Born in Meadville, Pennsylvania, Sharon Stone is the second of four children.  After winning several local beauty pageants and a writing scholarship to Edinboro College, she moved to New York.  Stone was immediately signed by modeling agent, Eileen Ford, and was soon modeling throughout the world, appearing in print and television ads for Clairol, Revlon and Diet Coke.

Sharon made her film debut (albeit fleeting) as the blond goddess who catches Woody Allen’s gaze on a passing train in “Stardust Memories” (1980).  During the eighties, she fared well in television, with numerous guest roles on police dramas like “Remington Steele” and “T.J. Hooker;” however, it was her four-episode appearance on “Magnum P.I.” that is probably her most notable, along with the supporting role as Robert Mitchum’s daughter-in-law in the epic mini-series “War and Remembrance”.

The movie that forever changed Sharon Stone was the incomparable “Basic Instinct,” in which she portrayed a bisexual author/sexual adventurer. “Basic Instinct” was the top-grossing film of 1992 and firmly landed Sharon on everyone’s radar.  She succeeded in carving out an attention-grabbing persona, confident and glamorous in an “Old Hollywood” sort of way.  Sharon commandeered the brush when it came to painting her own image and has become one of Hollywood’s most sought-after leading ladies.

Her tenacity paid off when she won a starring role opposite Robert DeNiro and Joe Pesci in Martin Scorsese’s 1995 film “Casino”; she applied herself assiduously to perfecting her honest portrayal of ‘Ginger’ and garnered an Academy Award nomination and Golden Globe Award for Best Actress in a Motion Picture Drama.

Soon after, she starred opposite writer/director Albert Brooks in “The Muse,” alongside Andie MacDowell and Jeff Bridges, earning her a Golden Globe nomination.  Stone also co-starred in “Simpatico” with Nick Nolte, based on the play by Sam Shepard.
Sharon’s other film credits include “Sphere” with Dustin Hoffman, “Intersection” with Richard Gere, directed by Mark Rydell, and the psychosexual thriller, “Silver,” directed by Phillip Noyce, co-starring William Baldwin and Tom Berenger.

Additionally, Sharon starred and executive produced the critically acclaimed “The Mighty,” and she received a Golden Globe nomination for her portrayal of the mother of a disabled child, played by Kieran Culkin.

In March of 2006, Sharon reprised her role as ‘Catherine Tramell’ in Michael Caton-Jones’ “Basic Instinct 2: Risk Addiction.”  In fall of 2006, Sharon starred in “Bobby,” the story of the assassination of Senator Robert F. Kennedy, which centered around 22 people who were at the Ambassador Hotel. She previously starred in “Alpha Dog,” alongside Bruce Willis and Justin Timberlake, a drama based on the life of Jesse James Hollywood, a drug dealer who became one of the youngest men to be on the FBI’s Most Wanted List. In spring of 2007, she starred in two indie films: “If I Had Known I was a Genius,” directed by Dominique Wirtschafter, and “When a Man Falls in the Forest” directed by Ryan Eslinger.  This past fall, Sharon filmed “Five Dollars a Day,” a comedy starring Christopher Walken.  Currently, she can be seen in “The Year of Getting to Know Us,” with Jimmy Fallon and Lucy Liu, which had its premiere at Sundance.

Off screen, Sharon’s charitable foundations have given life and hope to people around the world.  A devoted humanitarian Sharon has long been active in her support and involvement with organizations around the world.  In 1991, her sister Kelly severely injured her leg in an accident.  Sharon pulled her sister out of her depression, and together they founded Planet Hope, a foundation that sponsors diverse activities for homeless children of all ages and cultures.

At the United Nations on World AIDS Day 1995, Sharon Stone announced at a press conference that she had accepted an invitation to serve for three years as Chairwoman of amfAR’s Campaign for AIDS Research.  In 1998, as her term was coming to a close, Ms. Stone renewed her support of amfAR’s vital innovative research programs by vowing to continue as campaign chairman until a safe and effective AIDS vaccine is developed. Since accepting this key position with amfAR, Ms Stone has travelled nationally and internationally on behalf of the Foundation and is now their Global Chairman for Campaign Fundraising.  At each of her many public appearances, she has worked tirelessly to heighten awareness of HIV/AIDS as a threat to social and economic stability and to underscore the urgent needs for continued AIDS research.  Sharon is dedicated to this cause, helping to raise hundreds of millions of dollars for the battle against AIDS.

At the 1998 Cannes Film Festival Cinema Against AIDS event, Ms. Stone artfully raised the bidding for an impromptu Elton John / Ringo Starr performance of “Great Balls of Fire” by offering to dance as they played.  Video clips of her performance ignited television news programs worldwide, causing the event to raise over $1.2 million.  This success was followed later that year by amfAR’s Seasons of Hope event at which Ms. Stone, as emcee and host, joined the Foundation in paying tribute to Clive Davis, Tom Hanks and Barbara Walters for their contributions to the fight against AIDS.  This gala raised $2 million for amfAR’s AIDS research programs.  Ms. Stone herself was honored at Seasons of Hope in 1999 for her outstanding contributions to the Foundation.

Ms. Stone has twice served as host and auctioneer at amfAR’s Two by Two for AIDS and Art auction in Dallas, helping raise nearly $2 million for AIDS research.  In May 2000, she participated in an art auction for Phillips Auction House that raised $1.2 million, and in August 2000, Ms Stone served as host and auctioneer at Cinema Against AIDS Venice at the Venice Film Festival, where she helped raise over $500,000 and launched a special line of vanity cases that she personally designed for the luxury brand Louis Vuitton.  Ms. Stone is donating 100% of the proceeds from these exceptional cases to amfAR.  Most recently, in May 2008 Ms. Stone raised $10 million for amFAR’s AIDS research in Cannes. She continues to serve as a chairperson for amfAR’s annual Cinema Against AIDS.

In 1999, the AIDS Awareness Committee of Academy of Television Arts & Sciences presented Sharon with a Ribbon of Hope award for AIDS awareness and education.

In 2004, Project Angel Food honored Ms. Stone with an Angel Award for her commitment to the Project Angel Food mission for her ongoing contributions to the fight against AIDS.  Project Angel Food prepares and delivers free, life-sustaining meals daily to more than 1,600 people living with HIV/AIDS, all types of cancer, Parkinson’s disease, multiple sclerosis, diabetes and other serious illness throughout Los Angeles.  In the same year she received a Spirit Award from the National Centre for Lesbian Rights for her support of gay and lesbian civil rights.

In 2005, Sharon was honored with the prestigious Harvard Humanitarian Award to celebrate her ten years as an advocate for AIDs research.  That same year, she put her star power to use at the World Economic Forum in Switzerland and raised more than $1 million in five minutes to fight the Malaria epidemic in Tanzania.

Later, to benefit the victims of Hurricane Katrina in the gulf coast states, Sharon teamed up with songwriters Denise Rich, Mark Feist and Damon Sharpe, co-writing and producing the song entitled “Come Together Now.” She lined up a galaxy of legendary music stars who performed on the track including Joss Stone, Wyclef Jean, Celine Dion, Patti LaBelle,  Backstreet Boys, just to name a few.

In 2006, at the Women’s World Awards, Sharon’s philanthropic efforts were commended with the World Charity Award by Mikhail Gorbachev.

In 2007, Sharon was awarded the Muhammad Ali Humanitarian Award which is given to those who truly embody the fighting spirit of Ali in the race to find a cure for Parkinson’s disease.  Her dedication to the fight against AIDS and her work with amfAR was also honored that year with the Einstein Spirit Award and the Smart Cookie Award.

Sharon believes that her role is, in order, that of mother, then activist, and lastly, actress.  She will undoubtedly continue to excel in her efforts through her celebrity status and use it as a productive tool to make charitable contributions to various humanitarian causes around the world.  Her ceaseless energy for these causes and many others inspire Sharon to continually drive herself to achieve her ultimate goals, which are to find an end of HIV/AIDS, relieve hunger and homelessness and find peaceful solutions in a very troubled world.