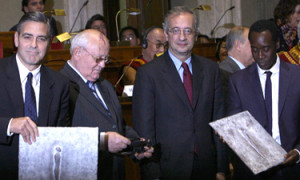 On the occasion of the 8th World Summit held in Rome on 13 December the Peace Nobel Laureates selected Mr George Clooney and Mr Don Cheadle as men of peace for 2007. The appointees were officially praised for “their strong engagement in favour of pacification in the tortured Darfour region, for having contributed to saving human lives and to alleviating the suffering of the civil populations victims of the war”.