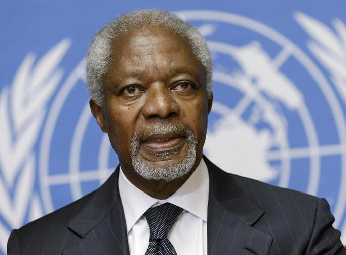 United Nations and UN Secretary General Kofi Annan (born in 1938), a politician and diplomat from Ghana. The UN and its Secretary General received the Nobel Peace Prize for their work for a better organized and more peaceful world. The uncontroversial and symbolic candidatures of the United Nations and its leader were universally expected to become peace prize winners named to mark the 100th anniversary of the Nobel Peace Prize.

Kofi Annan was born in an aristocratic family of Ghanian tribal leaders. He undertook university studies in Ghana and continued his education at Swiss and US universities, including the prestigious Massachusetts Institute of Technology. Mr Annan joined the UN in 1962, first working in the organisation’s European and African branches and later at the UN New York City Headquarters.

In mid-1990s he served as Under-Secretary-General for Peacekeeping Operations, a professional episode that exposed him to criticism after the award of the Nobel Peace Prize. According to certain opponents of Mr Annan’s peace prize candidature, he had not done enough to prevent genocide in Rwanda or the massacre of a thousand Muslims in the UN-declared safe area in Srebrenica.

In 1995/1996 Kofi Annan was the UN Secretary-General’s Special Representative to the former Yugoslavia.

He served two terms as the UN Secretary-General (1997-2006). Mr Annan is fluent in English, French and several African languages. At the end of 2004, the reputation of the UN and its leader was tarnished by a scandal involving malfeasance in the implementation of the Oil-for-Food programme in Iraq.