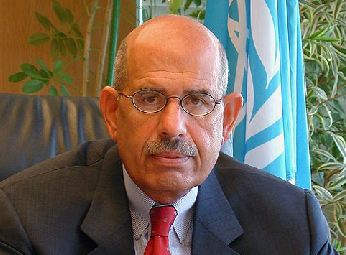 2005 – International Atomic Energy Agency (IAEA) and its director general Mohamed Elbaradei (born in 1942), egyptian politician and lawyer. The IAEA and Mohamed Elbaradei were awarded the Nobel Peace Prize for preventing the use of nuclear energy for military purposes and for striving for the safest possible use of this energy for peaceful purposes.In 2006, Professor Yunus and Grameen Bank were jointly awarded Nobel Peace Prize.

Mohamed ElBaradei completed his law studies at the University of Cairo. In 1974, he received a doctorate in international law at New York School of Law.

He started working for the IAEA in 1984, and served as the organisation’s Director General in the years 1997-2009.

ElBaradei was also an important figure in the Egyptian revolution which overthrew president Hosni Mubarak at the beginning of 2011. In December 2012, the liberal politician became a coordinator of the National Salvation Front, the opposition coalition against the new Egyptian president, Mohamed Morsi from the Muslim Brotherhood.