Sharon Stone has received the Peace Summit Award in Warsaw 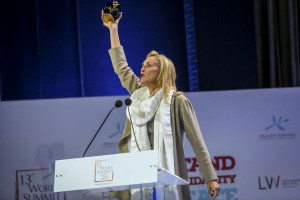 During the Summit debates Nobel Peace Laureates talked about the most topical issues related to peace, democracy and human rights. The themes raised at official meetings were followed up during the afternoon youth workshops held as part of the Civic Academy, a recurring project of the Lech Wałęsa Institute. 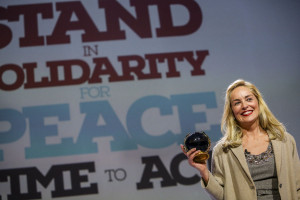 The last day of the Summit featured an official ceremony presenting the Peace Summit Award. Since 1999, the Award has been annually bestowed to high-profile cultural or entertainment personalities who act to address problems of the modern world. This year’s Peace Summit Award was presented to the actress Sharon Stone for her “activities that brought solidarity and new hope to the millions of people who have fought and are fighting against the tragedy of HIV/AIDS”. Accepting the prize from Nobel Peace Laureates, the actress called the audience to support her charitable work.

On the final day of the three days of debates, Presidents De Klerk and Wałęsa announced that the next year’s World Summit of Nobel Peace Laureates will be held in Capetown, South Africa.