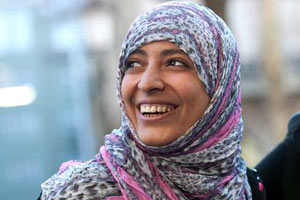 Tawakkul Karman, a key figure of the movement against Yemen’s President Ali Abdullah Saleh, is considered the face of the country’s 2011 revolution and known to her compatriots as the “mother of the revolution”. She is the youngest Peace Prize Winner so far and the first Arab woman to win the award.

In 2005 she was among the founders of Women Journalists Without Chains, a human rights advocacy. Ms Karman is a member of the Yemen’s leading Islamic opposition party, the Yemeni Congregation for Reform, the Islah, but went into conflict with the party’s ultra-conservative wing. In 2007 she orchestrated demonstrations in defence of the freedom of media and human rights.

In early 2011 she led protests against the long rule of Salah; together with her husband she set up and managed for several months a protest camp in the Yemeni city of Sana.