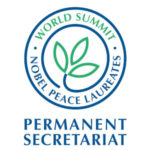 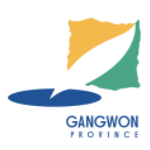 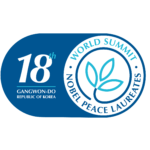 – Nobel Peace Laureates will attend the Summit and discuss world peace and conflict resolution under the title ‘Stronger Together.’

The 18th World Summit of Nobel Peace Laureates will be held for three days from 12 to 14 December in Pyeongchang, Gangwon Province, house of the Olympic Winter Games PyeongChang 2018.

The Summit will be composed of diverse activities including panel discussions, forums, Nobel consultations, youth events, and culture activities on peace.

The Nobel Peace Laureates, international peace experts and groups, youth and civil society will craft a new vision of peace and conflict resolution with the aim at contributing to the improvement of inter-Korean relations and furthering peace in the Korean Peninsula and the world under the title, ‘Stronger Together.’

It is worthwhile to pay a special attention to ‘Leading by Example’ program where youth participate in peace activities together with Nobel Peace Laureates.

‘Leading by Example’ allows local and international university students to meet with Nobel Peace Laureates and have dialogues on peace. This program was introduced in 2012 by the Permanent Secretariat of the Summit.

It is an educational program engaging youth in activities that will inspire them to choose peace over conflict, empathy over hatred, and open-mindedness over intolerance. This year, it will put a special emphasis on peace culture and bridge-building role of youth.

Created by late Nobel Peace Laureate, Mikhail Gorbachev, with clear objectives to contribute to world peace through Nobel Peace Prize winners, the World Summit of Nobel Peace Laureates took place for the first time in Rome, Italy in 1999. Being held nearly every year in major cities around the world since then, the Summit is one of the most important events that foster peace engagement and humanitarian actions around the world.

The World Summit of Nobel Peace Laureates revealed the reason for selecting Pyeongchang and Gangwon Province as the host of the 18th World Summit of the Nobel Peace Laureates, saying, “The Gangwon Province is still being torn between North and South, and still paying the price of war repercussions such as family separation and landmines. Nonetheless, it has promoted peace through successful hosting of the Olympic Winter Games PyeongChang 2018, becoming a prominent emblem of peace and human brotherhood.”

Gangwon Governor KIM Jin-tae mentioned, “Gangwon Province, the fiercest battlefield of the Korean War, has overcome the scars of the war and division and is pursuing the dream of peace. In this respect, having the Nobel Peace Laureates explore ways to enhance peace among human beings here in Gangwon Province itself holds great significance.”

He went on saying, “In the today’s world where world peace is being challenged in many ways Gangwon Province will seek measures to achieve peace and coexistence of mankind together with Nobel Peace Laureates based on the principle of integration and solidarity presented in the value of togetherness.”

Mayor of Pyeongchang said, “We are very pleased to host the World Summit of Nobel Peace Laureates in Pyeongchang, house of the 2018 Olympic Winter Games that inspired people around the world. We will continue to exert our efforts to spread world peace and the Olympic spirit.”

Ekaterina Zagladina, President of the World Summit of Nobel Peace Laureates, declares: “The Summit, with the attendance of the Nobel Peace Laureates, wants to contribute to the meritorious work that PyeongChang, Gangwon and South Korea are doing to spread the culture of peace. We aim that all this contributes to promoting dialogue for peace on the Korean peninsula and throughout the world, and that it opens a fruitful and stimulating dialogue on various levels of our society. “

She added, “Civil society is a real engine of change, and growth of sensitivity to the issues of human rights, peace, and sustainability, yielding real hope for a better future. This is the Legacy of the late Nobel Peace Laureate Mikhail Gorbachev, founder and former honorary Chair of the Nobel Peace Summit.”

In recognition to its contribution to peace, PyeongChang will be declared a “City of Peace”.

For media inquiries and accreditation please feel free to contact

The Permanent Secretariat of the Summit:

← Sign this petition if you care about humanity’s and the planet’s future Training event: "Leading by example" of the Nobel Peace Program on October 28th →